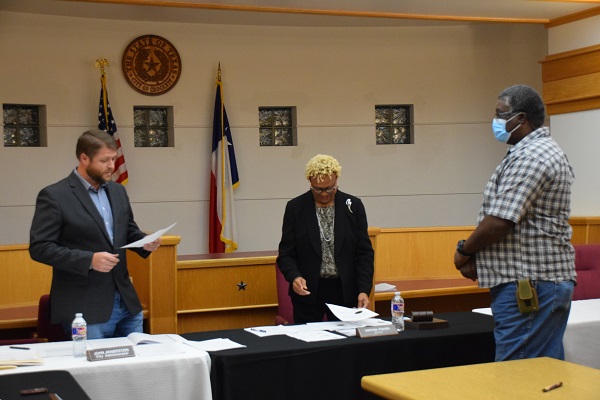 Christmas in Crockett Given Green Light

CROCKETT – It appears as if Crockett is gaining a new business as the Crockett City Council approved a tax abatement for Lincoln Lumber during its Monday, Nov. 2 regularly scheduled meeting.

James Gentry, Executive Director of the Crockett Economic and Industrial Development Corporation (CEIDC), was present at the meeting and addressed the council concerning the tax abatement matter.

“You have before you a tax abatement request from Lincoln Lumber. We are looking at a significant investment in our community as well as approximately 20 well-paying jobs. WE are looking at over an $11 million investment. The company is well-established and we have the president of the company, Jim Kelly, on the phone (ZOOM Meeting App),” Gentry said.

He added when the company approached him about the possibility of expanding into Crockett, it was something he couldn’t resist. Gentry went on to say they already own property in the area on Austin Street “… but they are interested in acquiring other properties for future expansion. This is just the beginning. I would like to think of this as a venture that would be long-lasting and something we can be proud of.”

The next item on the agenda was a report from Pineywoods Sanitation which had recently contracted with the city to provide sanitation services.

Denny Wheeler, a district manager with Pineywoods Sanitation addressed the council and said, “All the carts and dumpsters are in place. Today was the first day for pick up and it was very successful. We had to go back and get some of the dumpsters that were prematurely taken last week, but we were able to get them taken care of as well.”

Wheeler said construction on the company’s Crockett office was going well and he expected to open the office doors to the public by mid-December.

“Right now, we are employing 14 employees. That is without the admin person in the office. We started running ads in the newspaper this week and hope to have the position filled soon. I am also looking for one more driver. Hopefully, by next week, we will have 16 employees,” he added.

Following the sanitation report the council was asked to consider an ordinance amending Chapter 10, Garbage and Trash of the Crockett Code.

Crockett City Administrator John Angerstein explained, “The rates for service are the same or lower than our previous contract. The changes that will be made are in the commercial fees.”

He added all residential solid waste must be placed in the 95-gallon poly cart and all loose refuse and kitchen garbage must be placed inside a garbage bag. The residential trash rate will be $20.16 per month with once-a-week pickup. Each additional cart with be an extra $5.38 per month. The ordinance was unanimously adopted.

As the meeting continued, the matter of Christmas in Crockett was brought before the council once again. Previously, a motion to send an agreement for street closure to TxDOT for their approval had died for lack of a second. That decision was reversed a few days later.

Before any public discussion was held in the Monday night council meeting, a motion to affirm moving forward with Christmas in Crockett was approved.

The next item on the agenda pertained to the management and operations of the Porth AG Arena. Angerstein said he had revisited the original agreement. He also indicated he had researched the cost of electricity at the arena and determined in 2018, it cost the city $9,975 while in 2019 the cost was $8,765.

Angerstein went on to say several areas of the arena need to be addressed. Among these were: chain link fences; gutters; painting; netting; building maintenance; ADA compliance and downspouts.  A lengthy discussion on the matter was held but no action was taken.

In other matters brought before the Crockett City Council: