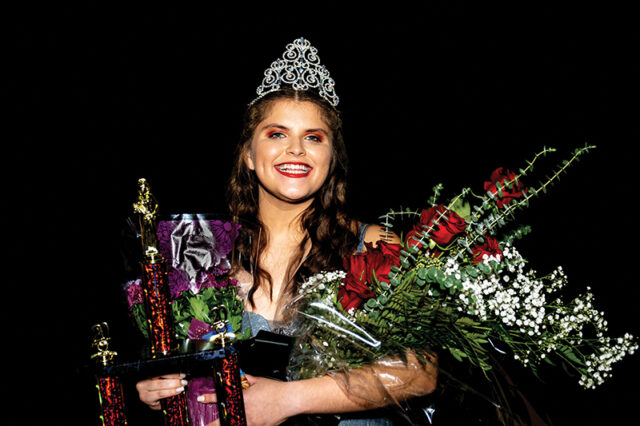 GRAPELAND – There was only one award left to present on Saturday night, Oct. 17. Arionna Davis, Miss New Beginnings was selected as Most Photogenic and Miss Congeniality. Miss Callaway-Allee Funeral Home – Macy Cutler – had been presented with the trophy for the talent competition.

This was THE moment six young ladies had been waiting for. After a brief pause – which must have seemed like an eternity – a drum roll started and the PA system seemed to crackle with excitement. The limited crowd in the Lorena Shoultz Auditorium fell silent. Emcee Charlie Bobbitt could be heard taking a deep before exclaiming, “And now for the $2,500 scholarship and the title of our 75th Annual Peanut Queen, this year’s crown goes to Miss Frontier Camp (Cierra Espinoza).

On Monday afternoon, Oct. 19, following all the accolades, pictures and ceremonial duties befitting a member of royalty, the newly crowned 2020 Peanut Queen spoke with The Messenger about her coronation.

“I was so overjoyed! I have been working backstage with the pageant for four years now and I had been looking forward to running for Queen. It’s something I never thought would be attainable to me,” Cierra said.

As to when she believed she had a shot at winning the title, Cierra said it wasn’t until the day before the pageant.

“I started to believe that maybe I had a chance – I guess probably not until the day before,” she indicated.  “This may sound bad, but I felt I would do well. I was talking to my fellow contestants and some friends /family who were coming for support and I was like ‘Wow! I could actually win the pageant. This is something that could actually happen!’”

Right before the announcement, Cierra said she thought to herself, whatever happens, it was meant to be. Cierra explained she felt this way because she believes a bond had been developed between the six young ladies and she would be content with whoever won the crown.

Concerning the stress level of the pageant, coupled with the threat of COVID-19 wiping it out at any given moment, Cierra revealed it was intense.

“At first we weren’t supposed to have a live pageant. We were preparing to record it and then livestream it. We were trying really hard but we knew if we messed up, we could film it again. Then, all of a sudden we found out we were doing it live so we had to work even harder. Plus, we knew at any moment it could be cancelled because one of us might come in contact with the virus. It was pretty stressful,” she said.

The contestants did have a scare when one of the young ladies came in contact with someone who had COVID-19. Fortunately, the young lady tested negative for the bug several times and the pageant was able to continue.

Asked to describe her day leading up to the coronation, the newly crowned queen said it started off with her sleeping in.

“I slept in because I knew I needed to get some rest beforehand,” she laughed. “I woke up at 10 am and then went over to a friend’s house to hang out for a little bit. Then, I went to go get my makeup done for the interview, got my hair done and then went to the interview.”

Pertaining to her talent, Cierra said she had originally thought about doing a skit but had trouble deciding on one.

“I was talking to (Pageant Coordinator) Miss Tammy (Hassell-Anderson) and was trying to figure out things I was good at. I told her I could play a couple of instruments, but I would rather not do that. She was asking me about my experiences throughout life and I don’t know how we got on the topic, but I told her when I was younger, I had lost my hearing. She asked me if I knew sign language and I told her I did but I would have to brush up on it,” she explained.

She said she worked with Stacey Vance at First Baptist Church in Grapeland who helped her shake off the rust and give a moving performance in sign language, set to the song “Hallelujah” by the group Pentatonix.

Asked what she would tell future Peanut Queen candidates, Cierra said, “One of my main reasons for running for Peanut Queen was to be a role model for younger children. One piece of advice I would give is to stay true to yourself.  I think that is something that really came through in my interview and in my performance on stage. Just have fun because it is over in an instant. Life goes so fast. It’s like Ferris Bueller said, ‘If you don’t stop and look around once in a while, you’re going to miss it.’ It’s really fun! Just be true to yourself and enjoy it.”

Cierra expressed she would like to thank God, her grandparents – Craig and Patty Surginer, Pageant Coordinator Tammy Hassell-Anderson, Pageant Emcee Charlie Bobbitt, her sponsor – Frontier Camp and all of her family and friends for their help and support along the way.