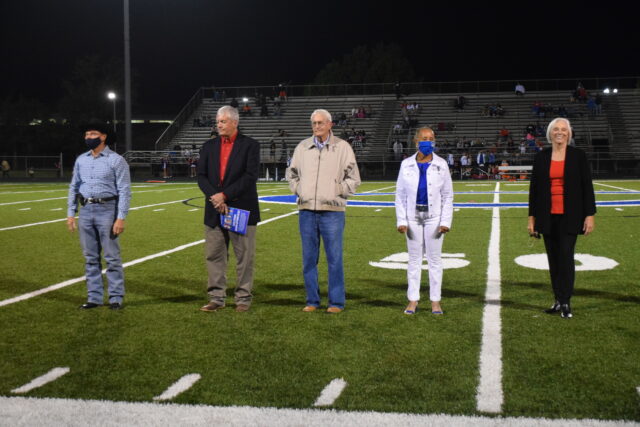 CROCKETT – On Friday, Oct. 2, a ceremony was held as four former Crockett Bulldogs were inducted into the Crockett ISD Ring of Honor.

The Ring of Honor ceremony was emceed by CISD Board of Trustees member Ansel Bradshaw. Following Bradshaw’s opening remarks, Crockett FFA President Weston Reeves led those who attended in the Pledge of Allegiance. Reeves was followed by National Honor Society member Leanna Tran who led the audience in the Pledge to the Texas Flag.

At the conclusion of the pledges, CISD Board of Trustees Secretary Dr. John Garner provided an invocation which was followed by the Crockett High School Band as they played the school song as well as the CHS fight song.

Following the CHS Band performance, CISD Superintendent John Emerich assumed the podium and welcomed both the honorees and their guests.

“These folks who are being honored tonight will be joining a small group of individuals who have had their names prominently placed on a wall over at the stadium. They stand for the very best of Crockett and for those who have come out of Crockett High School in years past,” Emerich said.

“We are glad you are here to celebrate them,” the superintendent continued. “We are especially thankful for the example they have shown throughout their lives and are still showing, even to current Crockett students.”

After describing how a person can be nominated for the Ring of Honor, Emerich introduced the CISD Board of Trustees. They were: President Lela Wheeler; Vice-President Karen Norman; Secretary Dr. John Garner; Mo Amjad; Ansel Bradshaw; Josh Crabtree; and Roy Johnson.

Bradshaw returned to the stage after the Board of Trustees’ introduction for the induction ceremony.

Each of the four inductees – Coach Driskell was represented by his brother Dusty – was called to the front of the stage where Bradshaw read off their high school accomplishments and what they have done since then.

As CISD Asst. Superintendent Chanel Veazy closed the ceremony with the benediction, the 2020 Homecoming ceremonies were starting to get cranked up next door at Monte Jack Driskell Stadium.