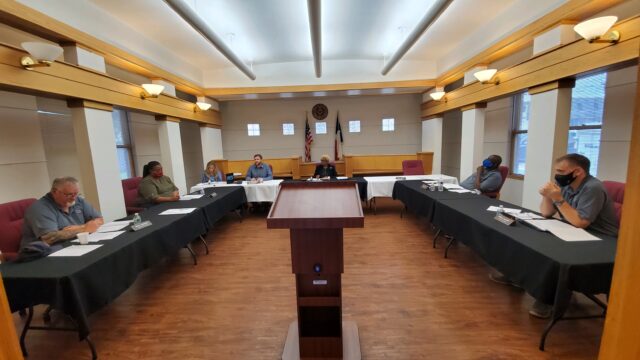 CROCKETT – The chances of a 2020 version of Christmas in Crockett took a major hit when the Crockett City Council failed to pass a resolution and agreement with TX DOT for the temporary closure of state right-of-ways for the event.

The matter of street closures for Christmas in Crockett came about when a normally routine agenda item, which called for a resolution with TX DOT to close the roadways, was addressed during the regular meeting of the Crockett City Council held on Tuesday, Sept. 8.

As the discussion on the closures began, City Administrator John Angerstein informed the council their packets contained information from the Crockett Area Chamber of Commerce “… which hopefully addresses the COVID-19 concerns the council may have. For additional information, I also included the governor’s latest proclamation as it relates to outdoor events.”

Texas Gov. Greg Abbott’s proclamation gave mayors and county judges the ability to impose restrictions on outdoor gatherings of over 10 people. It also made it mandatory that, with certain exceptions, people could not be in groups larger than ten and must maintain six feet of social distancing from one another.

“The proclamation also references the checklist for outdoor events,” the city administrator continued. “That is what they want you to address. They want you to have an event plan that addresses these issues. Primarily, the high risk proclamation is the one they are concerned about. For this to move forward to where this event is even possible, if council is to approve this, we need to send this to TX DOT, along with this event plan for them to review. If it is approved by TX DOT, ultimately – at the end of the day – it could still come back to the mayor for a final decision. Council can approve this to go to the next level and then it can go to the state where they can either approve it or deny it.”

Councilman Darrell Jones said one of his concerns was social distancing with the event attendees.

Council Member Marquita Beasley said this was the same concern the Grapeland Chamber of Commerce had when they cancelled the Peanut Festival.

“The Peanut Festival is a big money maker in Grapeland,” Beasley replied.

“Looking at the plan they have here,” Crockett Mayor Dr. Ianthia Fisher said, “they cut the vendors – I don’t know by how many.”

Angerstein added the chamber had spread the vendor booths out where they were not side-by-side.

“Some of the things they mentioned in this plan were to put touchless washing stations around the food area. Another thing they mentioned was they were going to limit the areas of egress, where you could enter and leave. They also said they would put up some type of notice about the rules of conduct,” Angerstein said.

Councilman Ernest Jackson, attending the meeting via the internet, also voiced his concerns over the vent.

“I understand the economic impact the event has for the county and for the city. We are also in the middle of a life-threatening situation with COVID-19. Even though you have booths that are set up at a distance considered to be safe, when you consider the magnitude of this event and the influx of people coming to this event, I don’t see any way possible that law enforcement can control the crowds of people,” Jackson said.

Jackson said he understood the desire to re-open the economy but also stressed the liability involved with it.

“I don’t see where at this time, in good conscience, the city or council can host this event. Even though it is a big money maker for many people, you can’t put dollars and cents over lives. That is what we will be doing if we consent to this and allow this event to take place,” he added.

Once his colleague concluded, Marsh indicated he would like to make a motion to close the streets.

“This is not until November. Let’s see how things go and then you (Dr. Fisher) have the final say. I make a motion we close the streets and then it goes to state,” he said.

The mayor replied, “The council has to decide whether to close the streets or not. If they are not closed, there is no point in going forward.”

“Like I said, I just went somewhere where there were 500,000 people,” Marsh said. “This state just needs to move on with this stuff. We have got to move on.”

“The council has the final say on whether the streets are closed. If the streets are not closed for the event, then we know the event is not feasible. Right now, we have reservations about having the event. Period. If the vote is not to close the streets, then the event won’t be able to function. The question now is, will the council authorize the closing of the street?” Fisher said.

“I make a motion that we close the street,” Marsh said.

After a few moments, and with no council member indicating they would second the measure, the mayor announced the motion had died for lack of a second.

The statement read, “I would like to take this opportunity to let our community know that as of today (Thursday, Sept. 10), the 39th Annual Christmas in Crockett is NOT cancelled. We, the Crockett Area Chamber of Commerce, have not taken the steps to cancel or postpone our festival.  We are working tirelessly to see what can be done in light of the initial ‘no vote’ to close city streets by Crockett City Council.

“Christmas in Crockett is not only a beloved festival of our town, but also brings in revenue for area retail businesses, gas stations, hotels, restaurants and more. Our local Non-Profits (churches, youth groups) earn a substantial amount of their income during the 6 hour event through raffles, bake sales and more.   We have had as many as 8,000 to 10,000 attendees walk through our downtown streets in one day that spend $$ at the festival and in our own city establishments.

“We are doing everything possible to protect our event attendees, volunteers and vendors with our COVID-19 Action Plan, even reducing events that might incur crowds, such as the stage area. There will be no children’s bounce houses, rock climbing wall or other areas.  We will also not have Santa on the Square this year to protect Santa as well as our littlest visitors. This year’s festival will be a scaled down event with fewer vendors and more space for social distancing.”

Prior to the street closure discussion, Angerstein provided an update on several city projects.

“One of the projects I wanted to bring to light – I know the council brings it up from time-to-time and we get complaints from residents – I wanted to let you know we are attacking the clean-up of abandoned properties and dumping. Lately, as of this past spring, this will be the third year we have received a DETCOG grant, via TCEQ, for ways we can address the clean-up of some of these sites,” he said.

The city administrator next showed the council members pictures of various properties throughout the city which had been cleaned. Among the addresses he showed were: 704 Cottonwood; 706 Cottonwood; 800 Cottonwood; 1011 N. Pear; 710 San Jacinto; 1005 W. Grant; 312 W. Patterson and 303 Wood St.

“This is something we intend to continue,” he added. “What happens is if the property is on the tax roll and they don’t clean it up, we clean it up through enforcement and then place a lien on the property.”