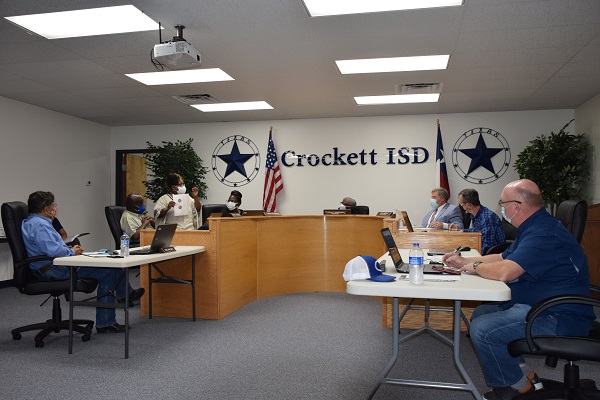 CROCKETT – The Crockett Independent School District Board of Trustees met on Monday, July 27 in preparation for the upcoming 2020-2021 school year.

As the meeting got underway, CISD Superintendent John Emerich provided the board with his monthly report.

“The first item is the TASB Board Policy Update 115. As our usual practice, we have given that to you now. It will give you time to look over it now so you can approve it at our next board meeting,” he said.

“You guys passed a resolution to give me power to do these waivers during the COVID-19 time. I just wanted to give you an update on the waivers that I did submit and have been approved by TEA. I submitted our missed school days waiver which allows us to get our ADA (average daily attendance funding) for the spring when we were out. I also submitted the educator appraisal waiver. Basically we did not have time to finish the appraisals for teachers this year and the state approved it,” he said.

Emerich added the early risk of failure waiver had also been submitted and approved. He added earlier in the day, Gov. Greg Abbott and the TEA waived requirements to pass the STAAR test for fifth and eighth graders to advance to the next grade.

As he continued, Emerich said the district had put out a survey which due back to the administrative offices by Thursday, July 30.

“I can tell you right now, we have had 718 responses which I am pretty pleased with. That is over have of our students who have been recorded on this survey. The biggest thing we are showing so far is we are showing about 50 percent are saying they are going to keep their kids home. That is a big surprise because we did not expect that many parents to say they wanted to keep their kids home. The state has told us we have to open school because we cannot guarantee that every one of kids has broadband (internet) at home. We are going to open and we are going to have in-person learning but we have also been told that for those students who do have that (remote learning) capability at home, we are going to do online learning at home,” the superintendent said.

Next, Emerich asked if Asst. Superintendent Chanel Howard-Veazy would like to add anything.

Veazy said she and the principals from the various campuses were working to put together a comprehensive plan, using parental input, to develop a plan to present to the board.

The next few agenda items concerned the 2020-2021 CISD budget. A budget workshop was set for Monday, Aug. 3. CISD Business Manager Tamra Scroggins said the proposed tax rate would be $0.97 for the Maintenance and Operations part of the tax rate and $0.21 for the Interest and Sinking part for a total of $1.18, the same as last year’s.

“I do believe once we get down to budget time it will be lower. I am working on a TEA survey. It is a local property value survey and they will tell us what our compressed tax rate will be. It will not be this high. I wanted to set it high so if there was a possibility…,” she said.

Also of note, the CISD board had a lengthy discussion on a TASB Extracurricular Resolution declaring students must use in-person learning if they want to participate in extracurricular activities. The measure passed by a margin of 5-1, with Board Vice President voting against the resolution.