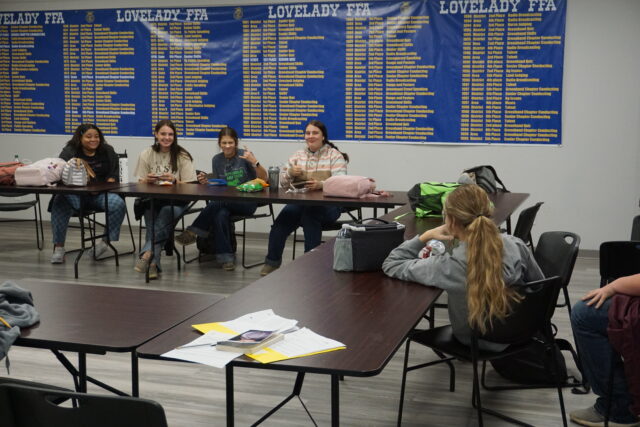 LOVELADY –   When the Lovelady Independent School District (LISD) held an open house before the beginning of this school year – they had a lot to brag about.

The district offices, much of the high school, the amazing gym and band room all caused locals to feel pride in their schools – and rightly so.

It’s only when you go to the back of the high school that you see one of the most needed – and according to its “residents” – one of the most appreciated renovation projects undertaken by the district.

Dustin Perry himself graduated from Lovelady in 2011. He heard rumors that the ag building was actually built before the rest of the school.

“It had never been remodeled since it was built,” Perry explained. “Wood paneling on the walls, the air conditioner didn’t really work right – and the old building had a certain kind of smell when you walked in.”

Although his mom taught kindergarten at Lovelady for 29 years, Perry never saw himself teaching. After college he worked in various sales jobs – from insurance to agriculture. He contacted the school after deciding he wanted to move back to the area. It just so happened that both of Lovelady’s ag department teachers were retiring.

“It turned out to be such a big blessing,” Perry said. “This is the start of year four for me. I thoroughly enjoy it. Selling insurance was a tough job with a lot of pressure. It’s a different kind of stress here in the ag department. It’s not a ‘9-5’ job. We are very active. We participate in just about every contest we can.”

The ag department stays as busy as any varsity football team – working to prepare for competitions late into the night – and traveling to competitions around the state.

Before the renovations, several teachers had to share one small area, the floors were worn brown and there was not a proper divider between the classrooms. Those days are long gone, as there are two ample classrooms, plenty of office space, shining floors and even a closet for tools and other materials.

Senior Kylie Pugh is the Lovelady FFA Chapter President – and won the Lone Star Degree – the highest FFA degree a student can earn in Fort Worth this summer. Asked if she wished the renovation had been completed before her last year in the program, Pugh laughed.

“I do! I wish this would have happened earlier,” Pugh said. “It’s a lot better place to work. I think it brought a feeling of ‘newness’ to the program – a fresh start.”

Makenna Pierce is in her fourth year in FFA and already has plans to attend Texas A&M after high school and study to be a physician’s assistant – either in dermatology or fertility. She said the new classrooms have given a new life to the program.

“It looks a lot better!” Pierce said. “All new flooring, new tables – they redid everything. It’s all brand new. It feels a lot better. The A/C works finally. It was really stuffy in here before. Now we can breathe!”

The Lovelady ag program is not only a historic one – but a growing one. It hit a record attendance this year bolstered by a bigger freshman class. Perry notes there are a few projects that set it apart from other schools – like the calf show now going into its 68th year.

“We have our Lovelady calf show, which I think is one of the most unique shows in the country,” Perry said. “We find all the steers ourselves over the summer. We make our own feed. We’re not showing cattle raised to be show cattle – we show truly pasture cattle!”

Perry feels the stress and the weight of the history of the calf show – there is a lot to live up to.

“Every year it hits me – this show has been going on longer than the Super Bowl!” Perry exclaims. “It’s generally the last weekend in February and a big deal in this community. It’s become kind of a scholarship show for these kids.”

Perry said with the old building’s A/C constantly on the fritz, it was uncomfortable for the students since it was never possible to get the thermostat below 76 degrees.

The bell rings and Perry heads into to the pristine new classroom to mold a new generation of farmers, ranchers, teachers and scholars.

He has a new problem now that everything is working perfectly: “Now some kids tell me it’s too cold in here.”