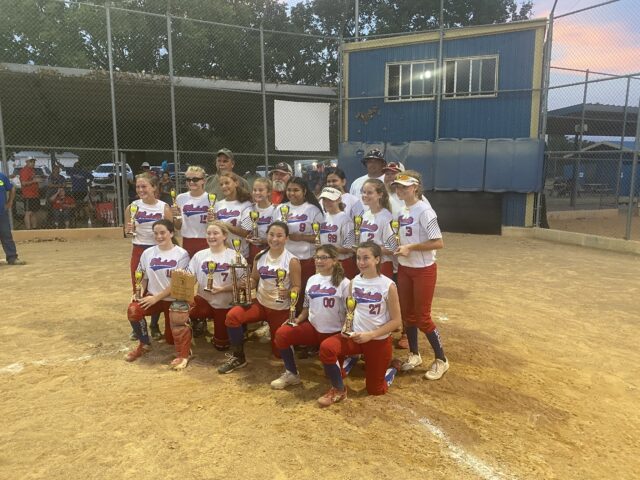 ROCKDALE – The Crockett Fireballs were back in the Texas Teenage Softball Tournament to defend the title they won in 2019. After winning the State Championship in the 12U division last year, birthdays happened and they moved up to the 15U division this year where they very nearly brought home a second state championship before falling to the Belton Outlawz in the title game.

There were 14 teams in the 15U division this year. They were: the Rockdale Scrappers; the Rockdale Dubs; the Belton Outlawz; the Troy Lightning; the Granger Lions; the Academy Lady Sting; the Mart Green; the Corsicana Lady Texas Rangers; the Crockett Fireballs; the Rusk Lady Eagles; the Buffalo Daggs; the Palmer Gold; the Edgewood Adrenaline; and the Comanche Maidens.

The Fireballs tournament run began on Monday, July 20 with a game against the Granger Lions. It was a tight contest throughout, but the Fireballs pulled it out in the end to win their opening game of the tournament by a final score of 2-1.

The win moved the Crockett girls into the second round while Granger was knocked into the loser’s bracket. The Fireballs second round game was against the Edgewood Adrenaline and was a much easier contest than their first game.

Crockett 10-runned Edgewood by a final score of 13-0. The victory over Edgewood on Tuesday moved Crockett into the third round of the double elimination tournament where they faced one of the host teams, the Rockdale Dubs.

The game was close but the Fireballs used their experience from last year’s championship run to pull out the 4-3 win and move into the tournament semifinals on Thursday.

There waiting for them were the Belton Outlawz. Belton had breezed through their first three games against Buffalo, Rusk and Palmer to set up a showdown with the Fireballs. In a battle of undefeateds, Belton squeaked by the Fireballs to pick up the 3-2 win.

The loss knocked Crockett into the loser’s bracket. The Fireballs still had a chance to come back and win the whole shooting match but it was going to be tough. They would have to win three games on Friday and the first contest was no gimme.

The Lions of Granger were waiting for them and they knew if they beat the Fireballs they would be playing for the championship. After the initial loss to the Fireballs, the Lions battled back to defeat Edgewood, Corsicana and the Rockdale Dubs to keep their hopes alive.

Just like in the first game, it was a back-and-forth affair. The offensive output from both teams ramped up compared to the first game, but in the end, the Fireballs were just too much for the Lions as Crockett won by a score of 9-8.

With the win over Granger, Crockett found itself in the finals against Belton. The Fireballs played valiantly, but after they battled Granger in the midday heat, they were simply gassed and fell to the Outlawz by a final score of 10-0.

Two other Crockett teams were at the state tournament as well. The Crockett Havoc competed in the 8U Coach Pitch State Tournament held in Rusk but lost their first two games and were bounced out of the tournament.

The Crockett Venom competed in the 12U State Tournament held in Belton but they also dropped their first two games and were knocked out the tournament.

Regardless of the outcomes, all of these young ladies should be commended for a job well done in even reaching the state tournaments. One thing is for certain, however, softball in Houston County will be a force to be reckoned with for many years to come.