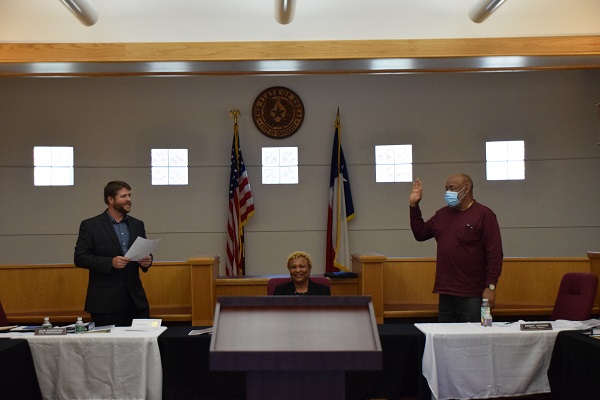 CROCKETT – For the first time in what seemed like forever, the Crockett City Council met in person on Monday, May 18 … sort of.

And just like old friends who hadn’t seen each other in a while, the council was talking trash to one another – literally – as the Monday afternoon meeting was highlighted by a discussion of which company to choose as the city’s solid waste contractor.

During the March 2 meeting of the council, Angerstein was authorized to notify the city’s current waste service provider of the city’s intent to not automatically renew their contract.

As a result, three companies had submitted offers for the city’s consideration and one-by-one, representatives of each company discussed their proposals.

First up was Karson Lawrence with Ameritex Services. He was followed by Mike Wilson, with Pineywoods Sanitation, and the presentations were closed out by Chris Bankhead with Waste Connections – the city’s current solid waste contractor.

The council also authorized Angerstein to enter into contract negotiations

Prior to the solid waste discussion, the city administrator informed the council about street projects currently underway. He also indicated the Municipal Court was tentatively scheduled to re-open after June 1.

“The parks are all open. Everything is open in the parks except the common high-touch surfaces such as playground equipment,” Angerstein said.

As the meeting continued, Angerstein informed the council that TXDOT was lowering the speed limits on US Hwy. 287, leading into and out of the city.

Dazed and Confused: A journey back from a stroke at 19
A Tree Grows in Grapeland
Court Says Farewell to Commissioner, Sheriff
Please follow and like us: