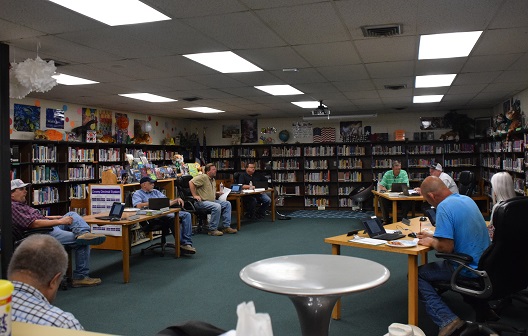 LATEXO – The Latexo Independent School District Board of Trustees met in a relatively short meeting on Thursday, May 14, highlighted by the reorganization of the board, along with a discussion of when schools might re-open.

The meeting was called to order shortly after 6 pm by LISD Board President Kelly Nicol and with no public comments, Nicol moved his colleagues into the actionable items part of the agenda.

Following the approval of the consent agenda, the next order of business was the swearing in of board members Dr. Michael Allen and Willie Patton. Neither Allen nor Patton drew an opponent in this year’s election and were sworn in as LISD Trustees for another three-year term.

Once the two board members were sworn-in, the subsequent agenda matter concerned the election of board officers for the 2020-2021 school year. A motion was put forward and seconded to keep the officer slate as is. The motion passed unanimously.

As the meeting continued, the trustees were asked to consider authorizing Superintendent Michael Woodard to execute employment contracts for professional employees thru August 2020.

“This is something we did last year,” Nicol said.

“Let me get this out there,” Patton interjected. “I called TASB (Texas Association of School Boards) last year and they do not recommend it. We were under different circumstances last year than we are now. So, for me, I’m going to go with TASB recommendations. It’s not a good practice. It’s what they told me last year. That’s the reason I will be voting no, so don’t take it personal.”

After a brief discussion, a motion was made and seconded to extend the authority to execute contracts for professional employees to the superintendent. The motion passed by a margin of 6-1, with Patton voting against the measure.

The last item on the agenda was the superintendent’s report.

Woodard said the district had been busy wrapping up the school year, which will end on May 22.

Continuing, Woodard said, “We are moving graduation to June 5. We had scheduled it for May 22, but for us to do it on the 22nd, we had to have five or less cases (of COVID-19) in Houston County. (Houston County) Judge (Jim) Lovell would have to sign off on that, but we have way more than that. He won’t go against what the governor has said. On June 5, we can have outdoor graduation. If we move forward on the 22nd all we could do was keep people in cars.”

The superintendent said he had spoken with the graduating seniors and they had expressed they did not want that to occur. As a result, the graduation will be held at Salmon Lake Park “… where hopefully by that time parents can sit in lawn chairs.”

When the graduation discussion concluded, Nicol asked Woodard if he had an update about when students may return to the classroom.

Woodard commented Texas Education Agency Commissioner Mike Morath had said the 2020-2021 school year may begin the way the 2019-2020 school year ended, with the physical schools across Texas being closed and education being conducted virtually or with homework packets.

“It’s not set in stone, yet, but he keeps talking about it. Last Thursday, he started talking about a year-long calendar. He’s thinking we may have more outbreaks of COVID-19 and if we do, having it built into the calendar to start – he’s talking about starting on August 1 and going until the end of June. We would only have off in July, with extended time at Christmas and having three-weeks built in at Spring Break,” he added.

The superintendent went on to say during a conference call on Wednesday, May 13, with superintendents from Region VI, there was no support for this idea.

“The governor (Greg Abbott) is going to speak again on Monday about some of this. We’ll see what he says and go from there,” Woodard said.

In other matters brought before the board, the resignation of Coach Lloyd Cain was accepted.