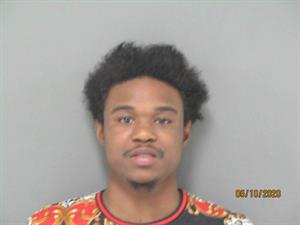 CROCKETT – Asking the wrong question to the wrong person led to the arrest of a pair of siblings on felony drug charges on Saturday, May 9.

Officers with the Crockett Police Department were dispatched to the Holiday Inn Express on Saturday, May 9 at approximately 11 pm in response to a male subject attempting to sell narcotics outside of the hotel.

When the police officers arrived, they made contact with Boggess who was standing outside the passenger-side front door of a vehicle.

“Once we (police) made contact, Boggess stated he asked a random person in the parking lot if they smoked weed. Upon further investigation, Boggess pulled out four small bags of marijuana from his right pocket and showed the officers,” an affidavit of probable cause stated.

After he pulled out the marijuana, Officer Nicholas Martinez did a pat down search of Boggess and found a clear, plastic baggie containing several pills suspected of being ecstasy.

Boggess was detained and placed in the back of a patrol unit while the investigation continued. Finding the ecstasy pills gave the officers probable cause to search the vehicle and while doing so, CPD Officer Matthew VanEgmond “… located a small yellow bag containing Clonazepam in a red bag in the passenger side front floorboard near where Boggess was standing.”

Clonazepam (Klonopin) is a prescription drug used to treat panic attacks, certain types of seizures, and the short-term relief of the symptoms of anxiety.

It was later learned the Clonazepam belonged to Boggess’ sister, Laporsha Portae Woody.

The affidavit indicated there were children inside of the vehicle when Boggess was detained and they went inside the hotel to tell Woody what was happening outside.

Woody came outside and “… appeared to be under the influence of alcohol and was not being compliant with officers at the time, so she was placed into a patrol unit for detainment.”

After being read her rights, the affidavit stated Woody admitted the red bag was hers but “… did not know the pills were in it. She further stated she did not know that Boggess was trying to sell narcotics.”

Woody was charged with possession of a controlled substance, penalty group three, a Class A misdemeanor.

Woody’s bond was set at $4,000. It was posted on May 11 and she was released, pending further legal proceedings.

The total bond for Boggess was set at $52,500 and he remains at the Houston County Jail.