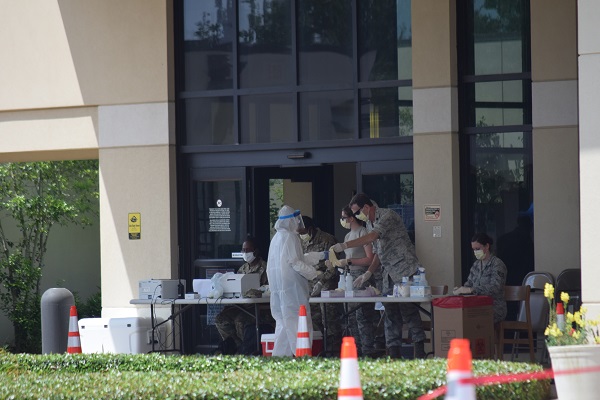 CROCKETT – It almost seemed as if they were re-shooting a scene from the 1995 movie “Outbreak.” On Monday morning, May 4, in the front parking lot of the Crockett Medical Center, military personnel wearing masks screened vehicle occupants and directed traffic towards the front of the hospital where Air Force medical officers, some adorned in bio-hazard protective gear, waited.

Despite the appearance, the Monday morning scene didn’t appear to reach the paranoia levels of Operation Jade Helm. It further appears as if a hostile government takeover of Houston County is not imminent. It was simply a way to do mass testing for COVID-19.

He explained there was a slight snafu with the registration process, but once that was ironed out, Dickey said the testing itself seemed to go off without a hitch.

“Just before the testing started, they told me they had 37 people registered. The original plan was to do 60 tests but I guess they always bring a few extra. Well, by the time they were finished, they wound up doing 75. I was back over there about 4:30 pm when they were starting to wrap up and I saw them actually turn a few cars away. I guess they had utilized all the tests they had available,” he said.

Dickey said there was a state official on hand who picked up the tests and then went to Trinity County where the Texas Department of State Health Services (TxDSHS) also had a testing site. Once the two sites were collected, a trip to Lufkin was made where the tests were flown to a lab in Beaumont.

“They told us to expect results in about three days. We may only hear how many positive cases we had but we’ll see what they have to say. It was a good location and the hospital was gracious enough to let us use their parking lot,” Dickey said.

As of Tuesday, May 5, Dickey verified Houston County had 12 confirmed cases of COVID-19.

“When we show a case as reported, that is when the hospital, Urgent Care or wherever calls us directly. We know there will be a lag in the TxDSHS report but as far as we’re concerned when they call us, they’re confirmed. It has been confirmed by a lab,” he said.

“That information will be coming from TxDSHS. We don’t have any on the list, yet. It is all based on a formula that they have. There are so many days if they were hospitalized, so many if they were not – it’s not a follow-up negative test. When they start showing that to us, we will have a line on our reports showing the number of recovered. That should make people feel a little better,” Dickey expressed.

Continuing with the conversation, Dickey indicated as of May 4, the Eastham Prison Unit had 30 inmates with COVID-19 along with seven TDCJ employees.

“One of the confirmed cases we had yesterday in Houston County was a TDCJ employee,” he said. “We’re in that realm where we will probably start seeing the numbers go up for a little while.”

Given that backdrop, Dickey was asked if he felt County Judge Jim Lovell could possibly tighten restrictions in the county.

“I don’t know. If we get a significant amount of numbers he may re-iterate there is a reason we did this in the first place. The governor has been real cautious about putting that type of language about being overly restrictive – above his order. That’s hard in Texas. All of our counties don’t have a case of COVID-19. Around 200 or so (216 out of 254) do, but when you have places that are just now getting an upswing, you need to be a little stronger in that regard,” he said.

“I would like to see them posting the TDCJ numbers in with the county numbers because that would remind folks this is still here and it is still significant. The other reason is those employees who are coming out of that environment are going to Walmart and HEB, so there’s still potential,” Dickey added.