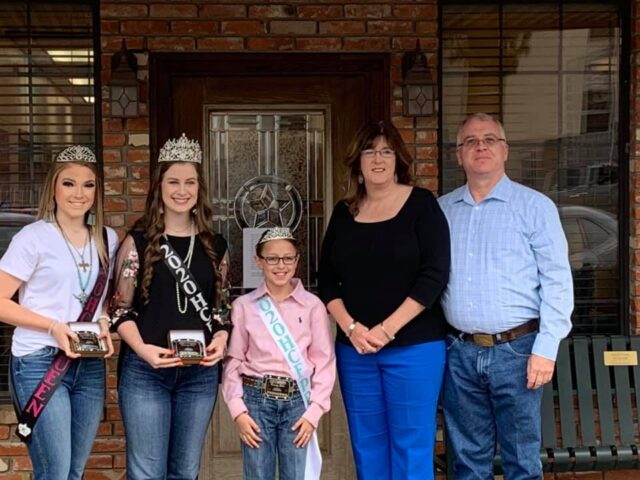 HOUSTON COUNTY – The 2020 edition of the Houston County Fair and Livestock Show was supposed to begin last Monday with the 2020 Queen and Princess ushering in the event. However, because of the COVID-19 pandemic, there will be no fair this year.

On Tuesday, March 31, The Messenger spoke to two of the three young ladies about what it meant to be named as Fair Royalty.

“I was really, really excited,” Laney Smith said. “I would have helped hand out ribbons and help people show.”

Asked when she learned about the Fair being cancelled, Laney said she was “… really disappointed.”

As far as what she would tell next year’s Princess contestants Laney said she would encourage anyone who wants to participate to go for it.

“It’s really fun and you get to help others,” she said.

The Latexo senior said she has been showing animals at the Fair for 10 years, but added, “I’ve been involved with this for my whole life because my family has always been involved in showing and participating.”

Jamie said she was planning to show a lamb, a goat and a Brahman heifer before the Fair was cancelled last week due to the Coronavirus.

When she learned the Fair was going to be cancelled, Jamie said, “It was an overall heartbreak. I had tried prepare myself ahead of time because surrounding counties had already cancelled their fairs. I was in Houston when all that mass chaos occurred when they shut that (the Houston Livestock Show and Rodeo) down. It’s an overall shock because it’s my senior year and I don’t get to make those memories.”

On a positive note, Jamie added, “It’s like we are getting ready for the next chapter. We have already made so many great memories. You have to take the good with the bad.”

As far as what she would tell those who try out for the 2021 Fair Queen title, Jamie commented, “You get to make so many new friends. You truly put yourself out there and try new things.”

Her Co-Queen – Lexi Davis – had a prior engagement and was unavailable.

April Fowler-Ice, the coordinator for the Princess and Queen competitions, said the queens and princess were all disappointed but they all seemed to be handling it well.

“They were disappointed. Obviously, that’s something they really looked forward to – achieving their goal. They really help out more than most people realize. They serve as ring announcers and they are kind of our little ‘go-fers.’ They were disappointed but they completely understood that the safety of every exhibitor there was more important,” she said.