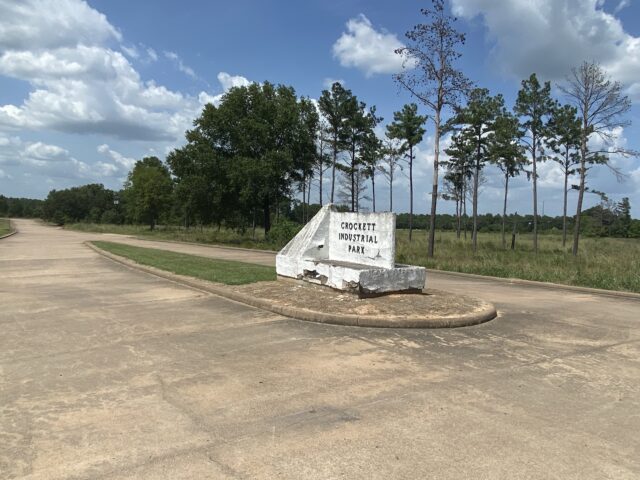 CROCKETT – It was announced on Thursday, July 16 that the city of Crockett has been awarded a $2 million grant from the US Department of Commerce’s Economic Development Administration (EDA).

According to a press release from the Department of Commerce, the grant will be used “… to make critical broadband and natural gas infrastructure improvements at the city’s industrial park. The EDA grant, to be matched with $500,000 in local investment, is expected to create or retain more than 70 jobs and spur $3.1 million in private investment.”

After receiving news of the grant award, Crockett City Administrator John Angerstein commented, “We are expecting a commitment letter and will be well on the way towards this much needed infrastructure upgrade to the Industrial Park and southern part of our town.”

“Along with upgrades to the Industrial Park,” he added, “this project will also fund new water mains and new roads along S. 4th St. and S. 5th. St., leading to the industrial park, as well as fiber optic lines for all the businesses from Loop 304 up to the Houston County Law Enforcement Center. This will provide an industrial grade looped water system that is reliable, as well as the needed street upgrades in leading to the park.”

Dana Gartzke, performing the Delegated Duties of the Assistant Secretary of Commerce for Economic Development explained Crockett “… was severely impacted by heavy rains and floods in October of 2018. This project will promote economic resilience by providing enhanced broadband and natural gas line infrastructure needed to advance business growth in the region and attract new businesses to the area.”

Governor Greg Abbott also weighed in on the grant award.

“These infrastructure improvements to the city’s industrial park will ensure greater economic growth, more jobs for Texans, and a brighter future for the people of Crockett. I thank Secretary Ross and our federal partners for their continued investment in Texas’ success. Working together, we will bring greater prosperity to the city of Crockett and communities throughout the Lone Star State,” the governor stated.

US Senators John Cornyn and Ted Cruz also expressed their appreciation to the federal government for making the grant funds available to Crockett.

“While Texans continue to persevere as COVID-19 wreaks havoc on our state, we must take steps to ensure that our communities are equipped to weather the storm,” Sen. Cornyn stated.

Sen. Cruz stated, “The people of East Texas have endured a lot of hardship over the past couple of years, but they remain strong. This investment provides essential support to modernize Crockett’s infrastructure, which will help mitigate future disasters and provide job security in the community for years to come.”

This project was made possible by the regional planning efforts led by the Deep East Texas Council of Governments, which EDA funds to bring together the public and private sectors to create an economic development roadmap to strengthen the regional economy, support private capital investment and create jobs.

“On behalf of the City of Crockett, I’d like to give our deepest gratitude to all the parties involved in making this possible, each of our state and federal representatives that wrote letters of support, Deep East Texas Council of Governments (DETCOG) for their invaluable advice and assistance in the writing and filing of the grant, and Crockett EDC for sharing the financial cost with the City of Crockett,” Angerstein stated.

This project is funded by the Additional Supplemental Appropriations for Disaster Relief Act of 2019 (Pub. L. 116-20) (PDF), which provided EDA with $600 million in additional Economic Adjustment Assistance (EAA) Program (PDF) funds for disaster relief and recovery for areas affected by Hurricanes Florence, Michael, and Lane, Typhoons Yutu and Mangkhut, wildfires, volcanic eruptions, and other major natural disasters occurring in calendar year 2018, and tornadoes and floods occurring in calendar year 2019, under the Robert T. Stafford Act.

The mission of the U.S. Economic Development Administration (EDA) is to lead the federal economic development agenda by promoting competitiveness and preparing the nation’s regions for growth and success in the worldwide economy. An agency within the U.S. Department of Commerce, EDA makes investments in economically distressed communities in order to create jobs for U.S. workers, promote American innovation, and accelerate long-term sustainable economic growth.