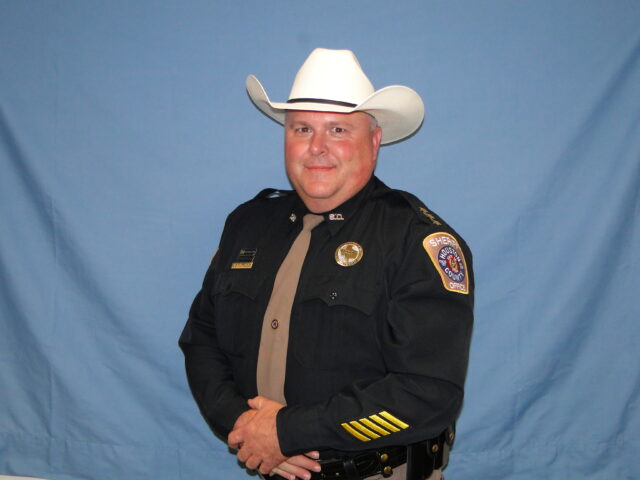 HOUSTON COUNTY – Given Texas Governor Greg Abbott’s executive order to not gather in groups of 10 or more, the Houston County Commissioners Court met in a teleconference (for the public) on Tuesday, March 24.

The meeting was highlighted by the acceptance of Houston County Sheriff Darrel Bobbitt’s resignation and the appointment of Chief Deputy Justin Killough to serve as sheriff until after the Nov. 3 elections had been canvassed.

At the midway point in the meeting, Houston County Judge Jim Lovell addressed the acceptance of Sheriff Darrel Bobbitt’s resignation.

“Sheriff, Houston County cannot thank you enough, for the service you have provided to the sheriff’s office and the people of Houston County,” the judge said.

The sheriff replied, “I would like to say this has been one of the greatest honors of my life to serve as the sheriff of Houston County. I remember nearly 20 years ago, running for the office. I remember an elderly gentleman in the county who I went to and asked about running. He said, ‘Son, you don’t have enough money and you don’t know enough people. They (political opponents) have a big head start on you. I’ll vote for you but you’re probably not going to make it.’ It just about killed my spirit at that time, but God had a different plan and I’m very thankful I was able to serve as the Houston County Sheriff all these years.”

Bobbitt continued, “I have had so many people be so good to me and my family and they have treated me wonderful. It has indeed been a pleasure to serve with this court and all of the commissioners and judges before. All these years, I heard story after story about sheriff’s and commissioners and judges and how they were at odds in their counties. Believe me, when I go to conferences I hear about how commissioners only want things for themselves. They don’t want to give anything to the sheriff and then I hear the sheriff wants everything in the county. The truth is, I have never felt that with this commissioners’ court. Anything I ever brought anything to the commissioners’ court and the county judges of the past, I always felt like they put the interests of Houston County first. It didn’t mean they always gave me what we asked for, but they always gave me what we needed.”

Following some personal words of gratitude from Precinct Two Commissioner Willie Kitchen, as well as the county judge, a motion was made, seconded and approved to accept the sheriff’s resignation.

With the sheriff’s resignation, the next item on the agenda called for the appointment of a sheriff to “… serve until a successor has qualified following the canvass of the General Election in November 2020 and to approve the necessary bond for selection.”

A motion was made to appoint HCSO Chief Deputy Justin Killough to the position with an effective date of March 31.

Before a vote was taken, the chief deputy said, “No one is more regretful about that resignation than me. I’ve been with the sheriff, ever since he took office. I’m very familiar with the situation at that time and how much he’s done. He has built our office from manpower on up to the building itself. I know this is just for a short while but I while try and uphold those values and ethics he has set.”

Bobbitt endorsed his chief deputy saying, “He is the most loyal man you will ever see. He is a fine individual. I have no doubt that he will work hard to be a success and do the best he can.”

A motion was made, seconded and unanimously approved to appoint Justin Killough as the interim sheriff of Houston County.

Following the appointment of the sheriff, Justice of the Peace Precinct One Clyde Black addressed the court about an old friend.

“I think everyone is familiar with a gentleman who used to roam our streets named Tom Bradshaw, the JP said. “Tom was a personal friend to me in many ways and he was always present at county functions. He always had that Fedora, a big smile and a camera around his neck.”

Black explained he thought of the late Tom Bradshaw because April 4 “… is National Hug-a-Newsperson Day. Because of social distancing, we probably can’t hug a newsperson in our community, but by the way of a hug, I’m asking the court to consider making April 4 in Houston County Tom Bradshaw Day in honor of his service to the community. Tom served the community and all of us well and never failed to help anyone.”

“On behalf of the commissioners’ court,” the judge replied, “I know everyone agrees and I do hereby declare April 4 as Tom Bradshaw in Houston County.”

Prior to the appointment of Killough to the sheriff’s position, a public hearing on a tax abatement agreement with Vulcraft was held. The purpose of the hearing was to discuss the creation and designation of a reinvestment zone located at 175 CR 2345 in Grapeland, pursuant to Houston County’s Tax Abatement Guidelines and Criteria.  The potential reinvestment zone is purposed to provide economic development within Houston County.

No one spoke in favor of or against the matter and as a result, the public hearing was closed.

The next agenda item called for the commissioners to consider action on the tax abatement agreement and the creation of the reinvestment zone.

“We are going to pass at this time, until our next Commissioners Court meeting,” Judge Lovell said. “We’re just not quite ready for it. We’re going to table this.”