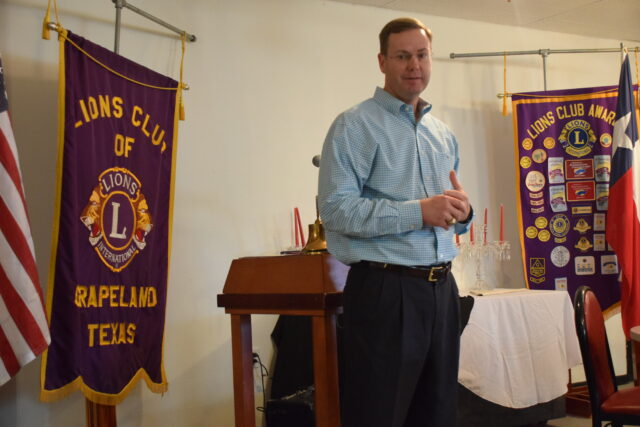 GRAPELAND – State Representative Trent Ashby stopped by Grapeland on Thursday to discuss several topics including the COVID-19 pandemic and the 2020 US Census.

“I normally have an idea about what I’m going to talk about when I speak to groups but the world has changed so much over the last two weeks,” Rep. Ashby began.

“I think it is only appropriate that I touch on the obvious issue that is consuming all of the attention that is driving our economy and driving our health concerns not just in Texas, but across the country. Let me say there has been a lot done in the country. I really can’t speak about the specifics which have happened from the President and at the Congressional level in Washington. That’s not where I serve,” he said.

The state representative explained his knowledge base centered on what was happening in Austin and in the six counties that made up State House District 57.

He reminded the Lions in attendance of Texas Governor Greg Abbott’s virtual town hall meeting on Thursday evening, March 19 and encouraged them to tune in.

As an example of how quickly things can change in dealing with the Coronavirus, while Ashby was addressing the Lions, Gov. Abbott issued four executive orders which banned gatherings of 10 or more, closed bars and dining rooms in restaurants and temporarily closed schools.

“I do think you may see some more drastic measures that may be taken in the state of Texas. I’m not privy to any of those decisions he may be announcing today. He made some comments that led me to believe if I was a restaurant of a bar owner, there may be something coming down the pike which might directly impact those businesses,” Ashby said.

Continuing, the state representative added prior to arriving at the Grapeland Noon Lions Club meeting, he had been on a conference call with a pastoral committee in Lufkin.

“They were meeting today to talk about their plans this weekend for church services. A lot of the bigger churches have already announced temporary closures. Others have gone to on-line services or Facebook Live type of events. A lot of the smaller churches may or may not have made their decisions. That got me to thinking how do we dissuade congregations – and not just the religious – but all congregations of 10 or more people from meeting. Certainly, you have to consider our Houses of Worship. It is not something I have heard a lot of discussion about at the state level,” he said.

After going over the most recent statistics (as of Thursday), Ashby said in his opinion, “The biggest challenge we face in the state of Texas and in this country is the lack of test kits which are available to our medical community. I can’t tell you what you have in Houston County (0) but I can tell you in Angelina County – a county of 90,000 people – there is not an abundance of test kits. That is one of the things I have been working on this week with Dr. (John) Hellerstedt at the Texas Department of State Health Services. We are getting an influx this week. The governor said he expects between 15,000 and 20,000 cases to arrive. We hope to get that many next week, as well. That is the biggest concern I hear over and over again from physicians, hospitals and our city and county health districts – we don’t have enough test kits that are publicly available.”

Changing topics, the state representative brought up the 2020 US Census.

“Folks,” Ashby said, “It is extremely important that you fill out the census questionnaire. A) It’s the law and B) we have more to lose in rural East Texas than people in other parts of the state by not filling it out.”

He said he had gone online recently to fill out the census “… and it took me eight minutes. I have two kids and a spouse but filling it all out from start to finish – I timed it – it took me less than 10 minutes.”

Ashby stressed it was important because “… it determines so much of our life for the next 10 years. It determines both state and federal assistance. For Grapeland and Houston County, you have to be counted. When federal dollars flow, whether it is for highways or Medicare/Medicaid, whether they are to help fund public hospitals, whether they are for our public school system, they look at those census numbers. There is a direct financial benefit for each of you to fill out this census form.”

He also said the census was important because it determined representation at the local, state and federal levels.