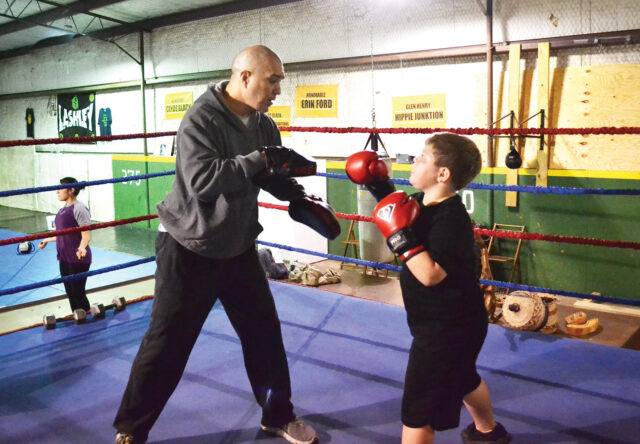 CROCKETT – Years ago as a young Houston police officer, Houston County Justice of Peace Pct. 1 Clyde Black got to see first hand the benefits a boxing club did for inner city kids.

“My partner and I dropped by once in awhile and thought it was a good work. It’s still in operation today,” Black said.

Over the years, the idea of opening up a boxing gym locally in Houston County has percolated in his mind, especially as he saw issues with families and truancy as a Justice of Peace.

“I had the idea to give a little back to Crockett, add a place for people to get off the streets and have some entertainment and exercise they can afford,” Black said.

Black’s dream has now come to fruition as he opened the non-profit Judge’s Chambers Boxing & MMA Gym a few months ago – with about 30 members – adults and children – currently utilizing the gym’s membership. The gym is now a 501-c3 organization.

“It’s exercise that is inexpensive and a good aerobic workout. You get to get out and release tension and punch a heavy bag. It’s great for working out and getting in good physical shape, not to mention to learn self-defense,” Black said. “For a lot of youngsters, it’s a good place, a welcome place.”

The Judge’s Chambers Boxing & MMA Gym is an official member of the USA Boxing organization.

“We’ve become a USA boxing affiliate – the group that sponsors the Golden Gloves. I’m taking classes to become a certified coach. I’ve been fortunate to find Vic Gonzalez to keep everything going every day,” Black said.

Victor Gonzalez, 44, was selected to be the gym manager and head coach. Gonzalez, from the Alice area, is a licensed pro boxer, certified corner manager for pro boxers and an amateur boxer coach. Also helping with the gym is local MMA fighter Tim Lashley.

“Vic is a very goodhearted, loving guy – a tough guy – a boxer and pro fighter. I think he is influencing and having a positive impact on people already,” Black said.

Gonzalez has boxed for 24 years – and became a pro boxer last year – almost giving up on making boxing a part of his life.

“God opened this door and here I am. He opened the door with everything I need. I am really blessed to be here. It was an answer to my prayers,” Gonzalez said, noting that he will be representing the Judge’s Chambers Boxing & MMA Gym and Crockett as a professional boxer.

His passion is to work with kids.

“A lot of inner city kids are drawn to fighting. I like to use boxing to give them life lessons. I see myself as a life coach to guide them and help them,” Gonzalez said. “My vision is to get the gym to grow, hopefully so it can be self-sufficient. I want to leave a legacy for Judge Black.”

The gym is generally open Monday through Friday from 5 to 8 p.m. at 426 Alabama St. in Crockett. However, out of caution and concern about the coronavirus, the gym will be closed the week of March 16-20, re-opening on March 23.

“Kids these days are used to being on their electronic devices or a phone. They didn’t do what we did growing up – climbing trees and riding bicycles. So their coordination is really bad,” Gonzalez said. “We focus on coordination, foot movement, hand and eye coordination and exercise drills. We help them get in shape and strong while making it as fun as possible so they don’t see it as working out.”

The kids start out with two rounds of jump rope and then go around the gym to several stations such as line drills, tire station, rope station, kettle bell, stairs, etc. on a three-minute timer.

“They all know their stations. Each station is a round. While they are doing their stations, one by one I rotate them out during the hour and work the mitts on them, teaching them their technique and fundamentals they need in the ring,” Gonzalez said.

For the kids, getting to put on the boxing gloves and practicing in the ring with a boxer is a reward.

“Every kid in here loves the mitts. They love to get inside the ring. So I use it as a reward – if they do their workout stations, they get in the ring. You have to earn this,” Gonzalez explained. “It works as a coach. I don’t know why they enjoy it so much (working in the ring), but they do.”

Not only do they have fun, the kids and teens are learning a lot more.

“They are getting healthy and they are building their self confidence – that’s what it did for me growing up,” Gonzalez said. “For me, it made me believe in myself. For a lot of kids it helps with their self esteem. When I am in the ring working with them, I tell them to keep their eyes open – that they don’t have to be scared of nobody. But I am not teaching them to hurt people either – if I find out they are bullying someone, I tell them I won’t train them anymore.”

“I let them know they are brave, they are strong. It has so many benefits. It has helped me out a lot. Discipline. Character. Determination. Self control,” Gonzalez said.

In boxing, you cannot lose your self control, Gonzalez explained.

“Your opponent will be whispering in your ear things you don’t want to hear. He wants to make you upset, a lot of them do this. If you are fighting off emotion and you lose control, you are going to make mistakes. It leaves you wild and vulnerable, not thinking straight. Ninety percent is your brain and 10 percent is boxing,” Gonzalez said.

Gonzalez encourages the boxers of all ages to use self control to their advantage.

“I tell them no one can control your emotions but you. You are the only one who can control yourself. Nobody has the power to sit there and control you, unless you give it to them. So if they are picking at you or talking about you, as long as they don’t put their hands on you, just let them be. Learn to control yourself,” Gonzalez said.

He compares boxing to real life.

“The whole time our kids are growing up, we are training them – jab, turn this way, turn that way and be safe. But when they are grown the bell rings and they have to do it on their own. We have to train them what to do. That’s what I love about boxing, it prepares them for life,” Gonzalez said. “If we don’t fight for our kids who will? If we don’t reach out and embrace our youth, the world will, the drug dealer down the street will.”

Gonzalez and Black both hope that people of all ages will utilize the gym to find a more positive and healthy path in life.

“I hope the gym has a positive impact on people long-term,” Black said. “I challenged one guy to come to the gym to do something positive because he had been in trouble in the past. He started coming every day and bringing his son with him. He told Coach Vic recently that he devoted his life to Christ. That’s something I definitely approve of.”

Black said he also has heard from moms that their kids are putting down their cell phones and electronic devices.

“They are getting physical exercise. They are gaining self esteem. They are learning how to be a member of a group away from home, having social interaction with other kids. I can see the positives in not just the kids, but the adults as well,” Black said.

Gonzalez credits God for changing his life and putting him on the right path – and leading him to his newest role at the gym.

“I know who changed my life. God used my journey to help change my life,” Gonzalez said.

“The adults can use the gym to get in shape, jump rope, train like a boxer. They can work on the bags, do sit ups, circuit training like a HIIT workout, etc.,” Gonzalez said.

“Just drop by and visit the gym – come take a look,” Gonzalez said. The gym will re-open March 23.

Volunteers also are needed to help assist the trainers with the kids.

“I encourage parents who are at the gym with their kid to help volunteer. It’s a great bonding experience,” Gonzalez said.

In the future, Black plans to build a larger boxing gym facility on Fourth Street to replace the current facility housed in an old warehouse.

“I’m planning to build a building on Fourth Street that Claire (Black’s wife) and I bought,” Black said, noting that he would love to see professional boxing events come to Crockett after the new gym is built.

Eight-year-old Isaac Mendez, son of Kayla and Eric Mendez of Crockett, said he enjoys going to the boxing gym.

“I want to box because I think it’s fun. I’m getting stronger! I like getting to use the gloves, getting in the ring and punching the bags,” Isaac said.

For more information about the Judge’s Chambers Boxing & MMA Gym, visit the Facebook page or call 936-355-5566. 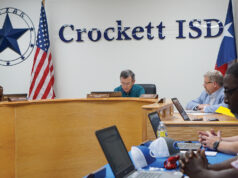 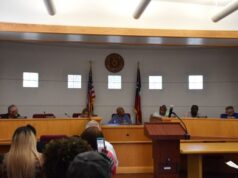 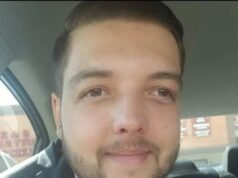