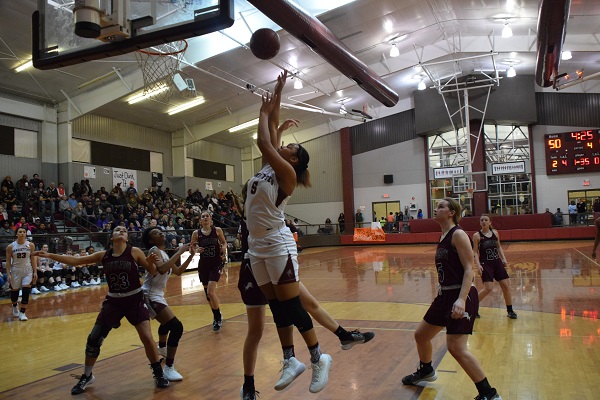 GRAPELAND – After clinching district on Friday night, the Grapeland Sandiettes had one more goal in mind and that was to finish their 2019-2020 District 20-2A schedule with an undefeated record.

The Sandiettes’ opponent last Tuesday night was a Lovelady Lady Lions team that was hungry to end Grapeland’s 32-game district winning streak. The girls from Grapeland hadn’t lost a district game since the Lady Lions defeated them in 2017 by a score of 47-45.

It was Senior Night and with five seniors in the starting lineup, the Sandiettes were not about to lose their final regular season game on their home-court. Honored before the game were seniors: Tatiyana Bowie; Aeriannia Granderson; KeKe Harris; Jessie Payne; and Kenya Woods.

With a packed house to see the long-time rivals duke it out on the court, the Sandiettes came out a little bit flat, but used a strong third quarter to put the game away and pick up the 59-34 win.

For the second consecutive game, Grapeland couldn’t seem to buy a shot on offense. The Sandiettes’ defense, however, kept the Lady Lions at bay long enough for the Grapeland offense to open up a 10-4 lead after the first eight minutes of play.

Teira Jones and Kenya Woods both netted three, first quarter points for the Sandiettes while KeKe Harris and Jessie Payne split the other four.

Kaiden LeMaire and Rajanae Polhamus both scored two for the Lady Lions in the opening period.

In the second quarter, the Sandiettes continued to struggle with finding the bottom of the net. They had the shots and the opportunities, but the ball simply wouldn’t drop. Still, they managed to knock down 12 points in the quarter to take a 22-15 lead into the locker room at halftime.

Jones paced the Grapeland second quarter offense with seven points while JaMiyah Bowie drained a three-pointer and Woods added a basket to close out the Sandiettes’ first half scoring.

Lovelady was led by LeMaire with five second period points while three other Lady Lions- Polhamus, Madelyn James and Shyanne Pipkin – all had two apiece to account for Lovelady’s first half point production.

Following the break, Grapeland began to pull away from Lovelady. Woods led the charge with 10 points while Jones knocked down seven. Harris dropped in a pair of shots from behind the arc as Bowie converted of two from the line to help the Sandiettes open up a 46-25 lead by the end of the third.

Polhamus put in six for Lovelady while LeMaire and Baylee Granberry chipped in two apiece.

The fourth quarter saw the Sandiettes begin to slow down the pace and work the clock. Tatiyana Bowie found the scoring column with four while Harris converted her third, three-pointer of the game. Payne, Woods and Granderson added two apiece to close out the Grapeland fourth quarter scoring.

Granberry netted five fourth quarter points for the Lady Lions while Macie LaRue put in four to round out the Lovelady scoring.

On the game, the Lady Lions were led in scoring by Rajanae Polhamus with 10 points. Kaiden LeMaire had nine and Baylee Granberry put in seven. Macie LaRue dropped in four while Madelyn James and Shyanne Pipkin both had two apiece.

The Sandiettes were led in scoring by Teira Jones and Kenya Woods with 17 points apiece. KeKe Harris knocked down 11 while JaMiyah Bowie, Tatiyana Bowie and Jessie Payne all had four points apiece. Aeriannia Granderson closed out the Grapeland scoring with two.

The win moves the Sandiettes to 29-5 on the season and moves their district winning streak to 33 consecutive games. The Sandiettes will face the fourth place team out of District 19-2A in the first round of the playoffs. Currently, there is a three-way tie for second place in 19-2A between Cayuga, Italy and Itasca. AS a result, Grapeland’s Bi-District opponent, the date, time and location are yet to be determined.