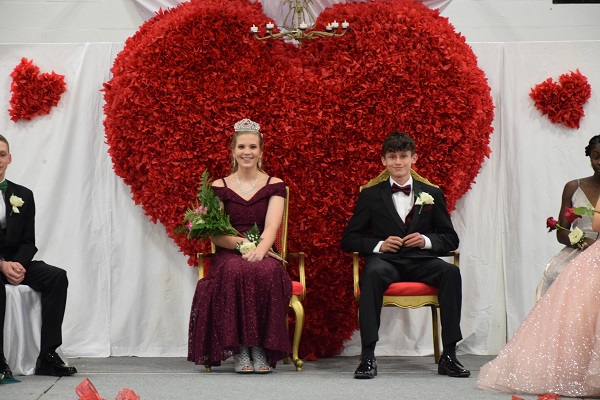 LOVELADY – The wait was excruciating. After being selected by their peers to represent each class at Lovelady High School, submitting an original essay and delivering a four-minute speech to the student body, it all came down to this.

The four young ladies selected as Lovefest Queen Candidates waited with bated breath to see who would be announced as the 2020 Lovefest Queen.

Once the 2019 Lovefest Queen, Sarah Thompson, had been escorted to the stage by crown bearer Kohen Bird and Flower Girl Stevie Murray, the seventh and eighth grade Princesses and their escorts made their way down the aisle.

“Each class is well represented by our candidates this year,” co-emcee Magali Castillo said. “Each young lady wrote an essay and delivered a four-minute speech about an assigned topic. This 2020 Lovefest Queen has been chosen from the accumulated scores of the essay and speech competitions. I would like to congratulate you on a job well done.”

The moment was at hand. Magali paused a moment and then asked her co-host, Scotty Moore, for the envelope.

A huge burst of applause, cheering and congratulatory whistles broke out in the LHS Gym while a broad smile splashed across Katie’s face.

In a previous interview, the sophomore representative said, “I always wanted to be Lovefest Queen because I have three older sisters and two of them were queens, including last year when my sister Sarah won.”

As the applause subsided, Scotty informed the audience the 2020 Lovefest Queen would be crowned by her sister Sarah, the 2019 Lovefest Queen.

Following the announcement of the 2020 Queen, the audience was entertained by elementary students in grades Pre-K through four.

The Pre-K students performed to the “Gummy Bear” song while the Kindergarteners entertained those in audience by transforming into dancing chefs to the tune of “Be Our Guests.”

The first graders did their rendition of “Tutti Frutti,” while the second grade performed to the song “Hey Good Lookin’.”

The third grade did a Zydeco inspired rendition of “Jambalaya” and the fourth graders closed out the entertainment with “The Cup Song.”