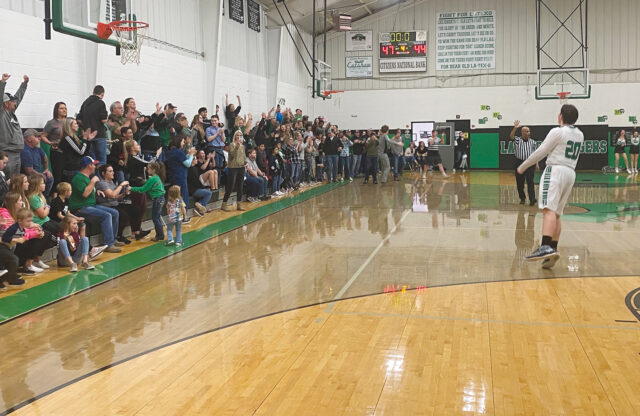 LATEXO – It was close, but in the end, the Latexo Tigers gave their fans a thrilling 47-44 win over the Leon Cougars as a Homecoming gift.

Despite a Tuesday loss to the Grapeland Sandies, the Tigers played well and seemed to use the momentum they gained from that game as a springboard against the Cougars.

The Tigers came out of the locker room on fire. Eli Filer lit it up for Latexo with nine first quarter points while Kaden Gonzales had four and Karson Hardy made three to help the Tigers take a 16-9 lead after the first eight minutes of play.

The Cougars first period scoring came from Micah Burleson with four, Logan Noey with three and Jacob Robinson with a pair of free throws.

The second quarter saw the two teams go to the line a combined 12 times. The Tigers’ Tyler Lumbreraz converted three of four from the charity stripe while three other Latexo players – Gonzalez, Hardy and Sam Jones – all had two apiece to help Latexo take a 25-19 lead into the locker room at halftime.

Noey paced the Cougars with five in the second while Aidan Turner hit a shot from behind the arc and Robinson made two of four from the line.

Following the break, the Cougars began to chip away at the Tigers’ lead. Burleson went to the line 10 times in the third and made seven while Turner and Stran Copeland dropped in four apiece to cut the Latexo lead to only two points after three periods of play.

The Tigers were paced by Lumbreraz with four points in the third while Logan Ray dropped in a shot from behind the arc. Filer and Gonzalez split the other four points as Latexo took a 36-34 lead into the fourth quarter.

The fourth quarter was a foul fest as the two teams went to the line a combined 20 times. Fortunately, for the Tigers, they made just enough to keep the Cougars at bay.

Jones led the way with five points on a two and three of four shooting from the line. Malachi Reece managed to hit two of seven from the charity stripe while both Gonzalez and Hardy had two apiece from the field to help the Tigers hang on for the 47-44 win.

Had Leon converted all of their foul shots, they would have won. Fortunately for Latexo they only made four of eight. Burleson scored four in the final period of play while Tyson Cornett and Ruben Gonzalez both had three.

On the game, the Cougars were led by Micah Burleson with 15 points. Logan Noey dropped in eight and Aidan Turner had seven. Stran Copeland and Jacob Robinson both had four while both Tyson Cornett and Ruben Gonzalez had three points to close out the Leon scoring.

Latexo was back in action on Tuesday as they welcomed the Centerville Tigers to town. As of press time, however, the final score was unavailable.