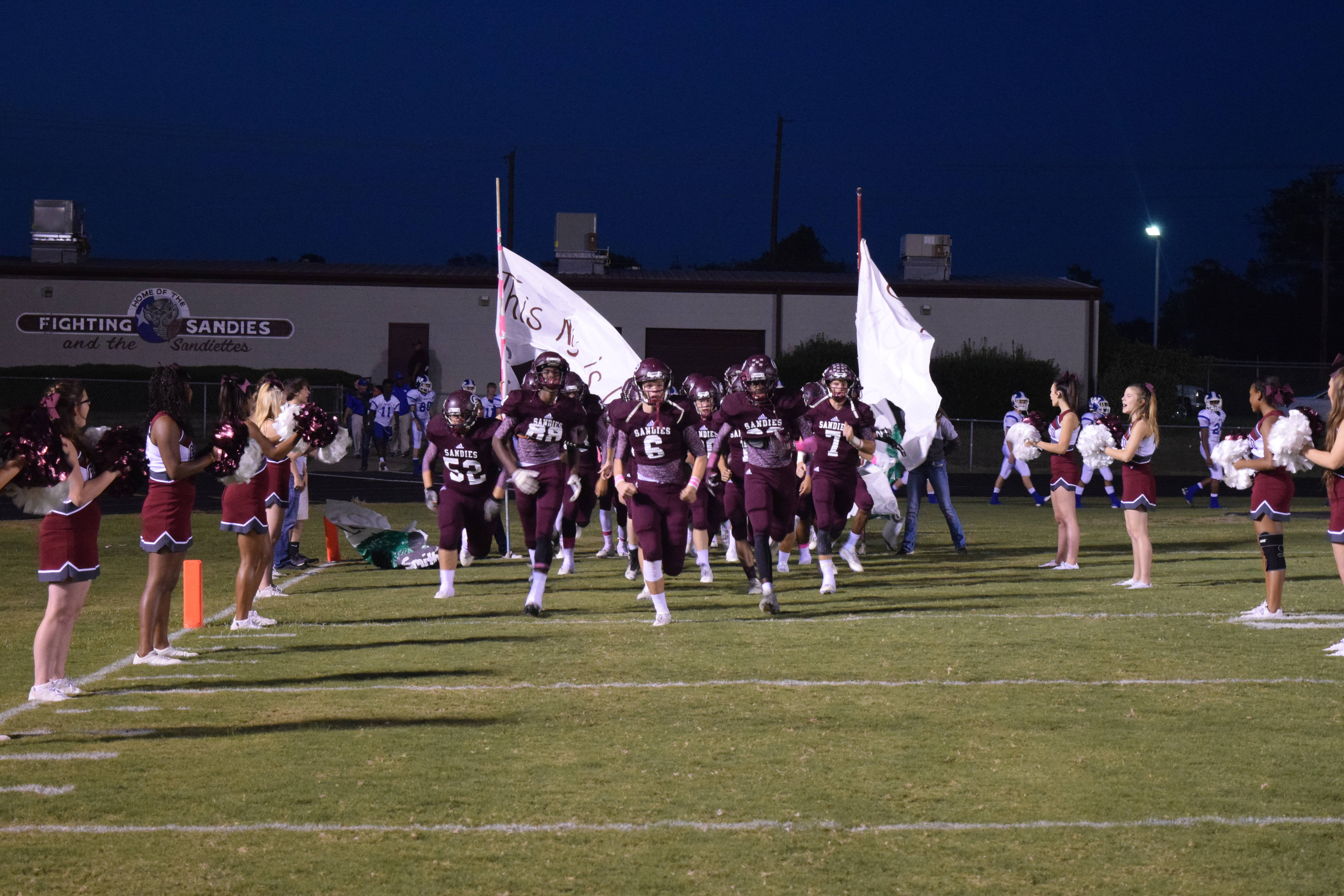 GRAPELAND – While it wasn’t actually a playoff game in the literal sense, when the Grapeland Sandies squared off against the Wortham Bulldogs on Friday Night from Sandie Stadium, in every other way possible, the postseason hopes for the two teams were on the line. 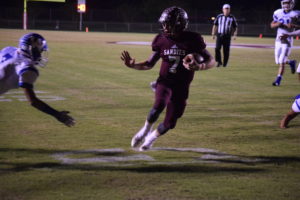 The Sandies came into the game with a 0-3 district record while the Bulldogs sported a district record of 1-2. Grapeland knew if they emerged from the contest as the victor, they had a better than average shot of beating Mt. Enterprise next week and would slip into the playoffs as the fourth seed out of District 11-2A DII.

When the Sandies took the field, they had a fire in their eyes and a hunger to bounce back from last week’s drubbing at the hands of the Tenaha Tigers. They set the tone of the game early on with several big hits on defense and quick strikes on offense as they took care of business, winning by a final score of 44-27.

Grapeland opened the game with possession of the ball and moved smartly down the field behind a balanced attack. Riley Chipman and Brayden Cheatham moved the ball effectively on the ground while QB Rick Frauenberger connected with Chipman and James Coleman through the air. In less than three minutes, the Sandies moved into Bulldogs’ red zone and scored the game’s first points on Cheatham’s two yard blast into the end zone. The extra point was blocked, but the Sandies had drawn first blood at the 9:14 mark of the first quarter and led by a score of 6-0.

With their playoff hopes hanging in the balance, Wortham tried to answer back and launched a sustained drive deep into the Grapeland end of the field. The Bulldogs’ drive was aided by a roughing the passer penalty on Kevin Davis which resulted i 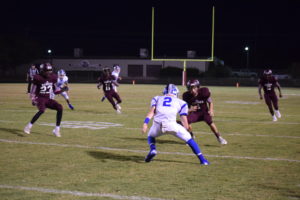 n a first down and put Wortham inside the Sandies’ 20 yard line.

After Camarron Mixon broke up a pass that had touchdown written all over it, Davis atoned for his earlier mistake as he pressured Bulldog QB Zack Jones into an incompletion on third and four from the Grapeland eight. On fourth down, Jones connected with wide-out Jayce Black but a host of Sandie defenders stopped the receiver short of the first down marker and gave the ball back to the Grapeland offense.

Grapeland aired it out on their second possession of the quarter. Frauenberger completed passes to Chipman, Cheatham, Rodney Davis and Keriun Davis to move inside the Bulldog 10. After Frauenberger’s first incompletion, the Sandies went back to the run. Chipman was able to find the edge of the Bulldog defense and scampered across the goal line just before the quarter ended. He also added the two point conversion and with 11 seconds left in the quarter, Grapeland led 14-0.

As the second quarter got underway, the Bulldogs looked like they were on the ropes. Jones threw an incompletion on first down and on second down he was picked off by Coleman who returned the ball down to the Wortham six.

The Wortham defense, however, stepped up and kept the Sandies out of the end zone. The defensive stand seemed to inspire the offense as the Bulldogs launched a 94 yard time consuming drive that ended with a Jones to Cole Shivers 23 yard TD reception. The PAT by Francisco Garcia was good and with 6:04 left in the half, Wortham had cut the Grapeland lead in half, 14-7.

After the kickoff, the Grapeland offense could not get going and the Sandies were forced to punt. The Bulldogs took over at their own 47 and once again drove into the Sandies’ red zone, aided in large part by seve 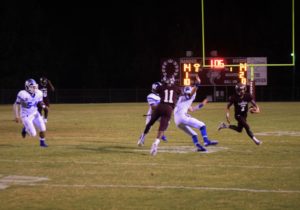 The quick strike, Grapeland offense that had been missing in action the last two weeks finally made an appearance after the kickoff. The Sandies took possession at their own 38 and on first down Chipman picked up six yards. On second down, Frauenberger found R. Davis for 12 yards to move across the midfield stripe

Armed a fresh set of downs, Frauenberger sandwiched an incompletion between 10 yard completions to Davis and Chipman. Now at the 20, Frauenberger connected with Josh “Bear” Ackley for 14 yards to move inside the 10. After an illegal motion penalty pushed the ball back to the 11, Chipman made a one handed, juggling catch of a Frauenberger pass crossed the goal line and then turned around and picked up the two point conversion. Chipman’s TD and two point conversion made the score 22-14 and brought the first half scoring to a close.

After the break, W 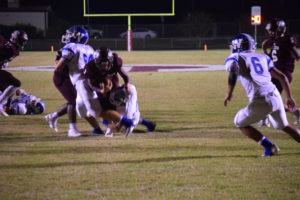 ortham was able to cut into the Sandies’ lead when Jones found Black on a 10 yard scoring strike. The two point conversion was unsuccessful but Wortham inched closer to the Grapeland lead and only trailed by two, 22-20.

Grapeland wasted little time as they pushed their lead out to 10 less than a minute later, wh
en Frauenberger found a wide open Ackley in the front of the end zone with a 28 yard TD pass. After Chipman converted the try for two, the Sandies now led 30-20.

On Wortham’s next possession, a lateral was mishandled by the back and Chipman scooped it up and raced 45 yards to the house for his third TD of the night. After he scored his fourth two point conversion of the game Grapeland led 38-20.

Stephon Ester scored from 24 yards out for the Bulldogs while Frauenberger snuck into the end zone from one yard out to make the score 44-27 at the end of the third quarter.  The Bulldogs were unable to generate any offense in the fourth quarter and the Sandies were more than happy to let the cock run. When the scoreboard clock finally displayed zeroes and the horn sounded, the Sandies had won 44-27 and kept their playoff aspirations intact.

Following the game AD/Head Coach Wayne Mahaffey commented on his team’s performance. “I thought we played well. We worked on a variety of things by moving Riley (Chipman) around and trying to get Kevin (Davis) involved in the offense. We had a few tools we haven’t had in a while and we knew coming into the game we wanted to get the ball into his hands and Rodney’s (Davis) hands as much as we could,” he said.

“I thought it was pretty good execution both offensively and defensively,” the coach added. “ 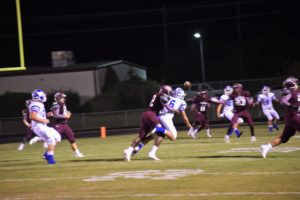 We basically took their running game away from them. They got the two big runs in the second half, but that was it. We didn’t feel like they could run the ball on us effectively and they couldn’t do it.”

Coach Mahaffey further commented, “It was a big win for us. It was a pressure situation and we came through in the clutch. That’s good for your kids when you’re faced with the pressure of having to win to have a shot at the playoffs and then you come out and play as well as we did. I think that’s a good sign.”

The Sandies hit the road next week for their final regular season game against the Mt. Enterprise Wildcats. Kickoff is scheduled for 7:00 p.m. If the Sandies win they will lock down a playoff berth against the winner of District 12-2A DII.