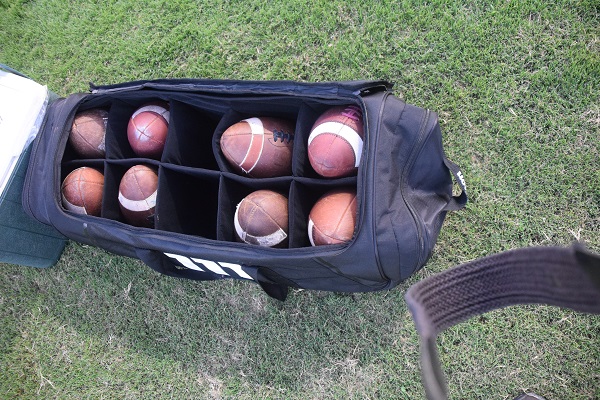 EAST TEXAS – Following last week’s games, five of the six area teams only have one more week before district play begins. Grapeland is the odd man out with two more games left before league competition kicks off.

This past week, area teams rebounded from a dismal showing in Week 2 to go 4-2 as the coaches began to polish their game plans they hope will lead to a successful district campaign and a deep postseason run.

Starting in Grapeland, the Sandies battled the Cayuga Wildcats through three quarters of the game until Cadarian Wiley scored on three consecutive touches. Wiley scored from 50 yards out with 7:41 left to play and the Sandies up by three.

A strip sack gave the ball right back to Grapeland and on Wiley’s next carry, he blew by the Wildcats defense from 40 yards out to push the lead out to 30-13 at the 7:18 mark. Following a Cayuga TD, Wiley scored again from 60 yards out at the 4:06 mark to put the game out of reach as the Sandies pulled away late to win by a final of 36-20.

The Crockett Bulldogs were on the road last week as they traveled to Buffalo for a non-district game against the Bison.

The game was a back-and-forth affair as Crockett fell behind early, but came back to take the lead, only to see Buffalo rally to tie things up.

Eventually, Keshun Easterling and Jadyn Collins proved to be too much for the home team as the Bulldogs broke into the win column for the first time this season with a 59-42 win.

The Lovelady Lions were also on the road as they traveled to Iola to take on the Bulldogs. Lovelady took an early 7-6 lead after the first quarter of play.

From there, however, the two teams slugged it out in the middle of the field before the Lions were able to add a late second-half TD and two-point conversion as Lovelady held off Iola to pick up the win and move to 2-1 on the season.

Moving to Anderson County, the Elkhart Elks kept on rolling as they moved to 3-0 following their 37-20 win over the San Augustine Wolves.

The Elks took an eight-point lead into the locker room at halftime and then pulled away to win by 17. Elkhart has one more game left before they begin district play on Sept. 24.

The Westwood Panthers dropped their next to last non-district game to the Eustace Bulldogs by a score of 38-21. The Panthers led most of the game but ran out of gas in the fourth quarter as the Bulldogs scored 23 unanswered points to pick up the win.

The Palestine Wildcats also lost last Friday but showed a lot of heart in falling to what looks to be a very good Rusk Eagles team. The Wildcats found themselves on the wrong end of a 14-3 deficit at halftime, but battled back to cut it to three with a chance to pull out the win in the final three minutes.

It wasn’t meant to be, however, as the Rusk defense forced a turnover on downs to seal the 21-18 win.