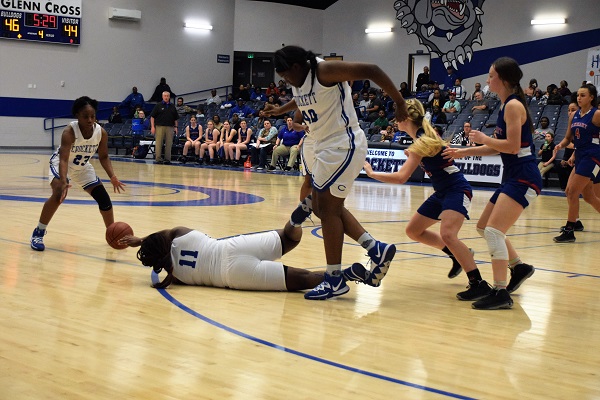 CROCKETT – The Crockett Lady Bulldogs hosted the Elkhart Lady Elks on Tuesday, Jan. 21 in a game with playoff implications. Both teams were trying to stay alive for – in all likelihood – the fourth seed out of District 20-3A.

Crockett had defeated Elkhart in the first round of district play by a final of 78-76 (OT) and the Lady Elks were looking for a little payback. It was not meant to be for Elkhart, however, as Crockett pulled away in the final minute to pick up the 65-56 win and keep their playoff hopes alive.

As the game bot underway, both teams struggled from the field. The Lady Bulldogs only managed to put in six points on baskets from Tocarra Johnson, Alinjah McKnight and Tynaisha McKnight.

The Lady Elks were only one point better and took a 7-6 lead after the first eight minutes of play. Brandi Cain, Haleigh Chapin and Lynsie Walding all scored two for Elkhart while Alana Canady made one of two from the line to help give the Lady Elks a one-point lead heading into the second quarter.

The Lady Bulldogs shot the ball much better in the second period as they dropped in 20 points to take a 26-21 into the locker room at halftime. A. McKnight paced Crockett with eight points while Johnson had five. Chelsea Walker found the scoring column with three while T. McKnight and Keaton Crabtree both had two points to close out the Lady Bulldogs’ first half scoring.

Elkhart also shot the ball better from the field but free throws were an issue as the Lady Elks were only four of 13 from the line. Madison Crader led Elkhart with five second quarter points while Chapin added four and Cain had three. Walding chipped in two as the Lady Elks found themselves trailing by five at intermission.

Following the break, the two teams played even in the third quarter. T. McKnight caught fire for Crockett as she poured in 12 points. Johnson and A. McKnight joined her in the scoring with two apiece as the Lady Bulldogs led by a score of 42-37 after three periods of play.

Just as T. McKnight was hot for the Lady Bulldogs, Cain heated things up for the Lady Elks with eight points. Crader dropped in six while Jayci Moseley got on the board with two.

With eight minutes left to play, the Lady Elks began to make a comeback and cut the lead to one on more than one occasion. In the end, however, the Lady Bulldogs managed to pull away and win the game by a final score of 65-56.

On the game, Crockett was led in scoring by Tynaisha McKnight with a game-high 21 points. Alinjah McKnight was also in double figures with 17 while Tocarra Johnson dropped in 11. Both Keaton Crabtree and Chelsea Walker had six apiece while JaKenya Johnson closed out the Lady Bulldogs’ point production with four.

The Lady Elks were led by Brandi Cain and Madison Crader, both with 17 points. Alana Canaday knocked down seven, Haleigh Chapin had six and Lynsie Walding had five. Both Laci McEnturff and Jayci Moseley had two apiece to round out the Elkhart scoring.

The Lady Bulldogs were back in action on Friday as they traveled to Teague to take on the Lady Lions. As of press time, however, the final score was unavailable.

The Lady Elks had a bye on Friday but will return to action on Tuesday, Jan. 28 when they host the Teague Lady Lions.