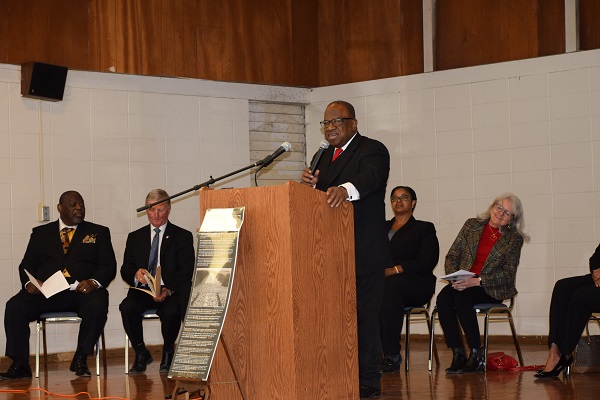 CROCKETT – Community leaders, elected officials and other dignitaries gathered together in Crockett on Sunday afternoon, Jan. 19, to honor and pay tribute to the legacy of Dr. Martin Luther King, Jr.

As the program got underway, Crockett High School junior Toreyan Jones led the audience in the Pledge of Allegiance and the Pledge to the Texas Flag.

Following the pledges, Mrs. Verna Harris played the piano as the audience joined together as one to sing the Negro National Anthem, “Lift Every Voice and Sing.”

At the conclusion of the song, Rev. Earl Harris provided the invocation. He was followed by Crockett Mayor Dr. Ianthia Fisher who welcomed those in attendance and said, “This is an exciting day for the ‘Paradise in the Pines’ because we are allowed to share in this yearly event which adds to the fact that good things happen in paradise.”

The mayor yielded the podium to Houston County Court-at-Law Judge Sarah Tunnel Clark who brought greetings from the county.

“I want to thank Roberta Mason and the committee for the work they have done for 42 years in keeping this dream alive,” the judge said.

Up next was District Attorney Donna Kaspar who brought greetings from the DA’s office.

Kaspar explained she recently watched “Return of the Jedi” where Darth Vader was attempting to get Luke Skywalker to join the Dark Side by having him respond in anger.

Roberta Mason, founder and chair of the committee, assumed the podium when Harvey concluded to lead those assembled for the celebration in a litany describing the struggles and victories achieved by Dr. King in the fight against injustice and racial bigotry.

As the program continued, Houston County Attorney Daphne Session introduced the afternoon’s keynote speaker – the Honorable Joe Morris Berry. Originally from Lovelady, Berry is the Co-Director of the Plainview Community and Area Combined Choir and Orchestra.

Once the introduction was complete, Berry assumed the podium and expressed his gratitude to Session for her remarks and to the MLK Committee for requesting him to speak at the commemorative ceremony.

Berry said while he was in college at Prairie View A&M, he had the opportunity to meet Dr. King. He said was a member of the acapella choir which would travel the country in recruiting efforts.

“It was on a Midwest tour that I had the opportunity to meet Dr. Martin Luther King. We left Chicago, headed back to Texas, with a few more performances left. We didn’t have a concert for a couple of days but finding a hotel or motel – back then – for a busload of black college students wasn’t an easy job,” Berry said.

He recalled they found a hotel in Memphis, Tenn.

“In late March of 1968, we drove into the parking lot of a motel in Memphis. I looked up and saw that big sign – the Lorraine Motel,” he explained.

The Lorraine Motel was the site of Dr. King’s assassination on April 4, 1968.

Berry said he and his fellow choir members walked around the city of Memphis and discovered Memphis was in the midst of a garbage strike.

After returning to their rooms and turning in for the night, he explained the choir director went around to each room and woke the choir members because he had arranged for them to meet Dr. King who was staying at the motel.

“Not knowing our director had made arrangements for us to meet Dr. King, Dr. Ralph Abernathy, Jesse Jackson and others. We hurried to get dressed – some of us. Some came in nightgowns with rollers in their hair, down to the conference room to meet our heroes. He had also arranged for us to sing for Dr. King and the others. We sang Randall Thompson’s ‘Hallelujah.’ It was exciting to shake hands and talk with our heroes,” he said.

“The next day,” he continued, “we packed up, loaded the bus and headed to our next engagement. It never crossed our mind that a few days later, on April 4, 1968 – on the same balcony we had been walking – Dr. Martin Luther King was assassinated.”

At the conclusion of his presentation, Berry was honored with a proclamation from Houston County Judge Jim Lovell.