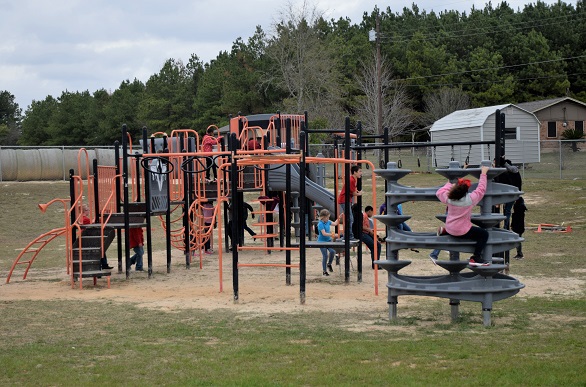 GRAPELAND – Students at Grapeland Elementary received a late Christmas present when they returned from their Christmas break as the long awaited playground equipment was installed during December and early January.

“I don’t think people realize – I suppose there are a lot of things people take for granted that are already there. But when you’re building a new elementary school, someone has to put it there. The landscaping had to be done after the school was built. Grass had to be planted and we had to determine the location of the playground,” Grapeland ISD Superintendent Don Jackson explained.

He said after careful consideration, it was decided to place the playground behind the school for safety reasons.

“The kids play totally out-of-sight from traffic and we found a really good deal,” he explained. “There was a 6A school out in West Texas who sold us their playground set. New playground equipment is very expensive and we got a fantastic deal.”

Jackson indicated the playground set was initially valued at $150,000 but GISD was able to purchase the equipment for a total of $78,000.

“We just added some swings out there and a fun thing is coming. We have two students in wheel chairs and now they will be able to have access to it, as well. One of the swings will allow a person to roll their wheelchair on it and it will swing with a platform,” the superintendent expressed.

Before he continued, Jackson praised former school board president Eddie Childress for helping to bring the accessibility issue to fruition.

“The installation of the equipment started before the kids got out of school in December and they finished it over the break. There are a couple if things that need to be done, but we were determined when the kids got back from Christmas vacation they would be able to get on their playground equipment. There were some happy kids on Monday,” he said.

As he continued, Jackson said the next step was to see if the district could salvage any playground equipment from the old elementary, which he said was scheduled for demolition during Spring Break.

“The location is great,” he added. “It is located right next to the gym so in a way it’s like PE and recess together. The reviews are good and the kids are excited to get out there.