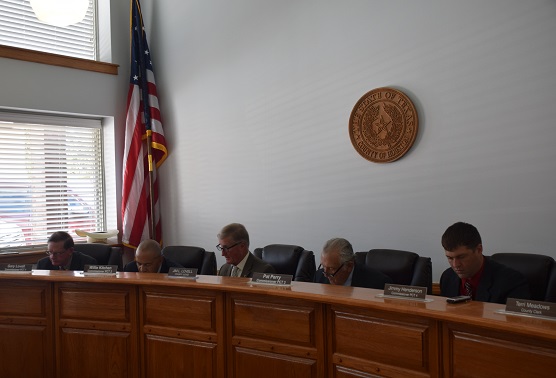 HOUSTON COUNTY – The Houston County Commissioners Court met in a regularly scheduled meeting on Tuesday, July 9, highlighted by a discussion on contract renewal with Lifeguard Ambulance Service as well as the rental of equipment during elections.

In regard to the ambulance service, Houston County Judge Jim Lovell explained a decision from the court was unnecessary.

“I spoke with the chair of the (Houston County Hospital District – HCHD) ambulance committee – Dina Pipes – who said they (the HCHD) had voted to do the negotiation. They would take the contract and the county would be out of it. The contract would be between the HCHD and the ambulance service. We don’t have any action to take and I think that’s the way it should be,” he said.

A motion was made, seconded and unanimously approved not to renew the county’s contract with Lifeguard.

Prior to the ambulance contract discussion, Lovell addressed those in attendance about the county-wide large trash pick-up.

“It went over real big, as I understand it, during the first week in Precinct One. There were a good many folks who had to be turned away. It filled up pretty fast,” the judge said.

Precinct One Commissioner Gary Lovell reported he packed the trash as tight as possible while Precinct Two Commissioner said that could pose a problem.

Commissioner Lovell suggested designating one bin specifically for metal which he indicated would help out tremendously. No action was taken on the matter.

The next date for the large item trash pick-up is Saturday, July 13 at the Precinct Two County Barn.

The final agenda item brought before the court concerned an interlocal agreement between the county and all local entities for the rental of equipment during elections.

Elections Administrator Cynthia Lum explained while she was researching the issue she found a discrepancy concerning how much the county should be charging the entities. She indicated she was unsure whether the rental fee should be $50 per day or $50 per machine.

After a few minutes of discussion, it was determined to increase the cost of the rental to $75 per machine to help offset the cost of maintaining the voting equipment.

Time to Cowgirl Up!
Experience ‘A Night at the Casino with a Little Murder on the Side’
Grapeland Native to speak at Crockett MLK Program