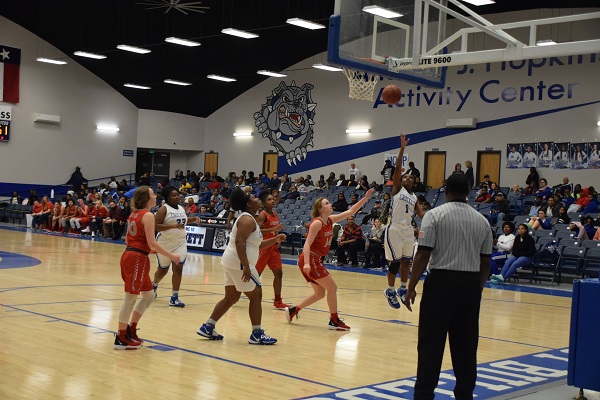 CROCKETT – The Crockett Lady Bulldogs returned home on Tuesday, Jan. 7 and welcomed the Groesbeck Lady Goats to the Andrew J. Hopkins Activity Center for a District 20-3A matchup.

The Lady Bulldogs came into the game with a 1-1 District 20-3A record while the Lady Goats were 0-1 in league play.

The game was relatively close throughout, but a strong second quarter from the Lady Goats allowed Groesbeck to pull away from the Lady Bulldogs on their way to a 58-47 win.

As the game got underway, the teams battled back-and-forth until the very end of the quarter as Groesbeck took a 15-14 lead after the first period of play. Kyla Evans scored six first quarter points for the Lady Goats while Brianna Dobson had four. Kennedy Brown and Alexis Johnson both had two while Kennedy Cox made one of two from the line.

Tynaisha McKnight led the Lady Bulldogs’ attack with six points while Jaycee Parker had four. Keaton Crabtree and Tocarra Johnson had two apiece to close out the first period.

The second quarter saw the Crockett offense go cold from both the field and the free throw line (two of eight) as the Lady Bulldogs only scored eight points on six from McKnight and two from Chelsea Walker.

The Lady Goats doubled up on the Lady Bulldogs as they dropped in 16 points to Crockett’s eight. Evans had six and Cox had three. Brown, Johnson and Kayla Menzel all had two while Brianna Dobson chipped in one to help the Lady Goats take a 31-22 halftime lead.

After the break, the Crockett offense seemed to get back on track, somewhat. McKnight added five to her total, Johnson had three while both JaKenya Tryon and Quenisha Henderson had two.

Evans paced the Lady Goats with five third quarter points while Johnson had four. Kole Tatum added three while Menzel added a basket to help give Groesbeck a 45-31 lead after three periods of play.

Try as they might, the Lady Bulldogs were unable to overcome the 14-point deficit in the final period of play and fell by a final score of 58-47.

On the game, the Lady Goats were led by Kyla Evans with 19 points and Alexis Johnson with 14. Kennedy Cox went for seven, Brianna Dobson had five while Kennedy Brown and Kayla Menzel added four apiece. Kole Tatum netted three and Kiera Anglin had two.

The Lady Bulldogs were led in scoring by Tynaisha McKnight with a game-high 19 points. Quenisha Henderson added six while both Tocarra Johnson and Alinjah McKnight had five. Three Lady Bulldogs – Jaycee Parker, JaKenya Tryon and Chelsea Walker – all had four to round out the Crockett point production.

The Lady Bulldogs were back in action on Friday, Jan. 10 against the Frankston Maidens. As of press time, however, the final score was unavailable.