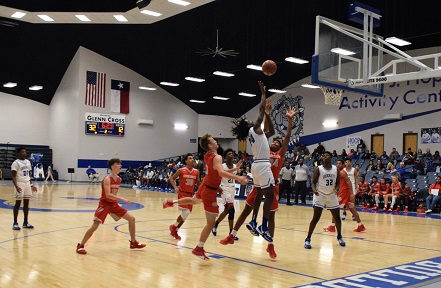 CROCKETT – After knocking off the Buffalo Bison on the road to open play in District 20-3A, the Crockett Bulldogs returned home to take on the Groesbeck Goats.

The Goats also opened district play with a win over the Westwood Panthers, 63-60. However, they had a less than stellar overall record of 7-12, while the Bulldogs came into the contest sporting a #2 ranking in the latest Class 3A TABC poll, with a record of 17-2.

After the opening tip, Crockett showed their lofty ranking was well-deserved as they raced out to a 32-8 lead after the first quarter, before throttling back and coasting to an easy 95-44 win.

Near the end of the first quarter, Jalyne Carruthers caught fire as he drained three consecutive three pointers as part of his 11 points in the period. Teddy Jones and Ty White both knocked down seven while Delvin Walker also hit a three-pointer. Courtney Byrd and Keshun Easterling added two apiece as Crockett opened up a 24-pont lead after one.

Groesbeck’s first quarter points came from Jayqualyn McDaniel with five, Chris Ramirez with two and Chody Spann with one.

The second quarter saw the Goats’ offense begin to click as they more than doubled their first quarter point production with 19.

Allen Lewis found his touch from the outside as he poured in nine points in the second quarter. Bryston Ferguson added four while McDaniel, Anthony Lewis and Tyson Pringle all had two each.

Courtney Byrd stepped up to pace Crockett in the second quarter with six points. DJ Williams netted four while a four-pack of Bulldogs – Easterling, Walker, Allen Horace and DJ Williams – all had two apiece to help Crockett take a 50-27 lead into the locker room at halftime.

Following the break, the Crockett defense played lights out as they held Groesbeck to seven third quarter points behind five from McDaniel and two from Bryan Dancer.

The Bulldogs’ increased defensive pressure led to success on the offensive end as Crockett widened its lead to 41 points after the third quarter.

Horace seemed to finally get going as he powered his way inside for six points. Byrd and White contributed four apiece while Williams had three. Once again, a four-pack of Crockett players – Easterling, Jones, Walker and Trevon Hawkins – all chipped in two as the Bulldogs lead 75-34 after three periods of play.

The fourth quarter saw Crockett trying to milk the clock while continuing to play solid defense on Groesbeck as they held the Goats to only 10 points in the final quarter. Allen Lewis pumped in seven while Anthony Lewis hit a three to close out the Groesbeck scoring.

Wallace paced the Bulldogs with six, fourth quarter points while Hawkins, Horace and Jones all had four. Easterling added a two-pointer to round out the Crockett scoring as the Bulldogs defeated the Goats by a final score of 95-44.

For the game, Groesbeck’s Allen Lewis led all scorers with 16 points. Jayquaylon McDaniel knocked down 12 and Anthony Lewis had five, Bryson Ferguson went for four while Bryan Dancer, Tyson Pringle and Chris Ramirez all had two. Chody Spann chipped in a free throw to close out the Goats’ scoring.

For the Bulldogs, Teddy Jones led five Bulldog players in double figures with 13 points. Both Courtney Byrd and Allen Horace worked inside for 12 apiece while Jalyne Carruthers and Ty White both had 11. Keyshun Easterling and AJ Wallace had eight points apiece while Delvin Walker and DJ Williams both went for seven. Trevon Hawkins closed out the Bulldogs’ scoring with six.