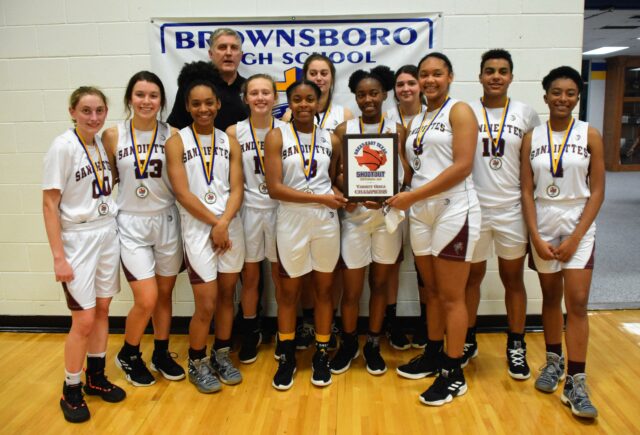 BROWNSBORO – Before the Grapeland Sandiettes started district play on Tuesday, the Sandiettes spent the weekend in Brownsboro competing in the Great East Texas Shootout Basketball Tournament.

One of the biggest and longest-running tournaments in Texas, the 33rd annual Great East Texas Shootout began on Thursday and ended for the girls with the Grapeland Sandiettes hoisting the championship trophy after defeating the Grapevine Lady Mustangs on Saturday afternoon by a final score of 51-39.

On Thursday, the Sandiettes took on Class 5A Lindale and very nearly doubled up on the Lady Eagles by a final score of 77-41.

Grapeland’s second game of the tournament saw the Sandiettes taking on the Sunnyvale Lady Raiders who came into the game with a record of 15-0 and were ranked #6 in Class 4A. The Sandiettes jumped ahead early in the contest and never looked back as they defeated the Lady Raiders, 55-46.

The win over Sunnyvale moved Grapeland into the tournament semifinals where they faced the Mineola Lady Yellow Jackets, a Top 25 Class 3A team. The game was close throughout as the two teams were tied at halftime.

The Sandiettes opened up a four-point lead after three periods of play and then held Mineola to three points in the fourth quarter as Grapeland hung on to win, 52-47.

The victory over Mineola moved the Sandiettes into the Tournament Championship against the Class 5A Grapevine Lady Mustangs on Saturday afternoon.

As the game got underway, the Sandiettes seemed a little bit sluggish and fell behind early. Grapeland’s first quarter points came from Teira Jones and Kenya Woods, who both had four.

It seemed as if the Sandiettes were forcing things which allowed the Lady Mustangs to clog the Grapeland passing lanes. As a result, Grapevine built a 14-8 lead after the first eight minutes of play. Dasha MacMillan knocked down seven points while Kennedi Archibald drained a three. Mimi Margiotta and Nadia Morris had two apiece to account for the Lady Mustangs’ first quarter scoring.

The second quarter saw Grapeland cut the lead to one as they held Grapevine to three points in the period on a two from Archibald and a free throw by Sidney McGregor.

The Sandiettes were stymied by the Lady Mustangs’ defense throughout the first half and only scored eight more in the second quarter. Jones added three to her total while Jessie Payne dropped in a three and KeKe Harris converted a pair from the charity stripe to help cut the lead to 17-16 at halftime.

Following the break, the Sandiettes began to push the ball up-and-down the court. The up-tempo game gave the Lady Mustangs problems on both the offensive and defensive ends, which allowed Grapeland to tie the game and take a two-point lead after a slick move in the paint by KeKe Harris.

With the score 19-17, in favor of Grapeland, Grapevine’s Abraham went down with an injury. The lack of Abraham’s defensive pressure allowed the Sandiettes to go on a 10-2 run to open the third quarter as they took a 26-19 lead with 5:10 left in the period.

After the two teams exchanged baskets, the action slowed down until the Sandiettes scored eight points in the span of 15 seconds to take a 36-21 lead with 57 ticks left in third.

MacMillan answered back for the Lady Mustangs as she drained a pair of threes to close out the quarter and keep Grapevine in the game at 36-27. She had eight of the Lady Mustangs’ 10 points while Morris had the other two.

Grapeland saw Harris hit a three to go along with eight from the field. Jones added seven and Woods had a basket to close out the third.

As the final period of play opened, Harris drove the lane and dished off to Woods under the goal. Woods made the shot, was fouled and when she connected on the free throw, the Sandiettes led by 11.

Two ticky-tack fouls let Grapevine to cut the lead to eight. Payne hit a two for Grapeland to push the lead back to 10 at the three minute mark but a free throw from Margiotta and a three from MacMillan cut the Sandiettes lead to six, with just over two minutes remaining.

Jones sealed the deal for the Sandiettes when she hit a driving lay-up with 1:36 left in the game and was fouled. Even though Jones missed the free throw, the Grapeland defense stepped up to force the Grapevine offense to waste precious seconds as the Sandiettes hung on to win the game – and the Great East Texas Shootout – by a final score of 51-39.

On the game, the Lady Mustangs were led by Dasha MacMillan with a game-high 19 points. Nadia Morris had six while Kennedi Archibald and Mimi Margiotta went for five apiece. Sidney McGregor added four points to close out the Grapevine scoring.

The Sandiettes were led by Kenya Woods with 17 and Teira Jones with 16 points. KeKe Harris poured in 13 and Jessie Payne dropped in five to round out the Grapeland point production.

As to the slow start in the championship game, Payne said, “We started at 8 am this morning and then they (Grapevine) played at 9:30 am so we were both kind of tired and we were slow to get going. But, with our defense – by the fourth quarter – we just wear people down.”

Concerning the third quarter when the Sandiettes began to open some breathing room, the coach said they went to a different defensive alignment which allowed them to pull away.

“It happens all the time,” he continued. “We shift our defense and the other team gets tired and then they panic a little. It just takes those short spurts and then we wind up pulling away at the end. This is a great tournament. There were a lot of highly ranked teams here. We did a really good job.”