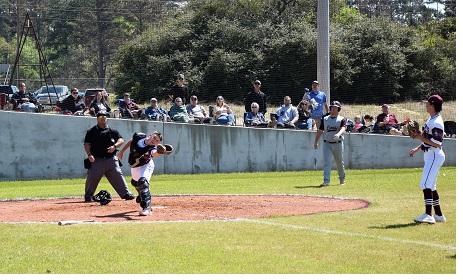 GRAPELAND – Some days you have it and some days you don’t. Last Friday, the Grapeland Sandies and Lovelady Lions hooked up for a District 21-2A Good Friday baseball game.

The game was anything but good for Grapeland as their cross-county rivals blasted them by a final score of 15-0.

Lovelady’s Carter Murray was on the mound for the Lions and he kept the Sandies in check as he threw five scoreless innings of two-hit baseball. Murray also struck out eight and gave up a walk.

Cameron Navarette got the nod for Grapeland and worked a strong first inning. He coaxed Slade Murray to ground to first for the first out, struck out EJ Sandoval on a nasty 3-2 pitch and then caught Carter Murray swinging at a pitch out of the strike zone to end the top half of the first.

When C. Murray took the hill, he was just as efficient as Navarette. He struck out Cole Goolsby and Jayce Elliott for two quick outs before Cooper Sheridan reached first after a dropped third strike. Sheridan was stranded, however, as C. Murray forced Jason DeCluette to ground out to short to bring the first inning to a close.

That was as close as the Sandies would get. When the Lions came in from the field, they crossed the plate six times to effectively put the game away. Errors, hit batsmen, timely hitting and hustle led to Lovelady hanging a half-dozen on Grapeland before the Sandies managed to get out of the inning.

C. Murray held the Sandies in check during the bottom of the second and when the Lions came to bat in the third, they added two more runs to their lead. Lovelady added four more in the fourth and three more in the fifth as the Sandies simply had no answer for the Lions and fell by a final count of 15-0.