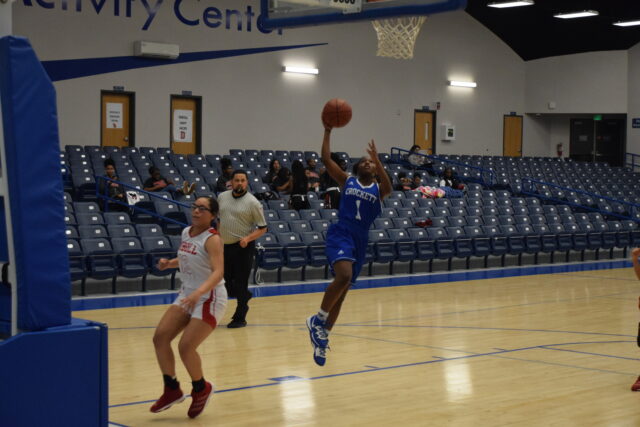 The second game of the tournament featured the Lady Bulldogs and the Lady Jacks in a back-and-forth game.

As the game got underway, both teams were a little sloppy on the court which was to be expected in the early part of the season. Diboll managed to singe the twines for 12 first quarter points on three points apiece from Ja’Dah Bussey, Asia Collins and Sy’Ria Garcia. Skyler Martin dropped in two and Kajah Phillips made one of two from the line.

Crockett held their own in the first quarter as they matched the 12 points from the Lady Jacks. Quenisha Henderson paced the Lady Bulldogs with seven points while Alinjah McKnight dropped in two. Keaton Crabtree, Tocarra Johnson and JaKenya Tryon all converted one of two from the line.

The second quarter saw the two teams battle evenly throughout the first seven minutes of the period, but the last minute belonged to the Lady Jacks as they went on a 7-0 run to close out the half and give themselves a 28-23 lead.

Phillips put in five while A’leiyah Rayson added four. Collins had three while Bussey and Martin had two apiece to close out the Lady Jacks’ first half scoring.

Henderson dropped in three for Crockett and was joined by Chelsea Walker with three of her own. La’Kyriah Hamilton broke into the scoring column with two and joined Tryon, who also had two. Staisee Riggins closed out the second quarter scoring for the Lady Bulldogs by making one of two from the charity stripe.

Following the break, Diboll continued its run and opened up a double digit lead by the end of the third quarter. Bussey went for seven, Collins and Martin both had four and Maliyah Phipps hit three free throws. Garcia and Phillips both chipped in two as the Lady Jacks took a 50-37 lead into the final eight minutes of play.

C. Parker came alive for Crockett as she dropped in five points. Hamilton added four, Walker had three and Riggins chipped in two.

Down by 13, the Lady Bulldogs mounted a furious comeback but could not quite get over the hump as they fell by a final score of 60-52.

Crockett was led in scoring by Quenisha Parker with 12 points. La’Kyriah Hamilton and C. Parker dropped in nine apiece, while Chelsea Walker added six. Alinjah McKnight had four and four other Lady Bulldogs chipped in three each.

Diboll was led in scoring by Ja’Dah Bussey with a game-high 14 points. Asia Collins and Skyler Martin both dropped in 10. Kajah Phillips had eight and Sy’Ria Garcia had five. Five other Lady Jacks also contributed to the scoring.