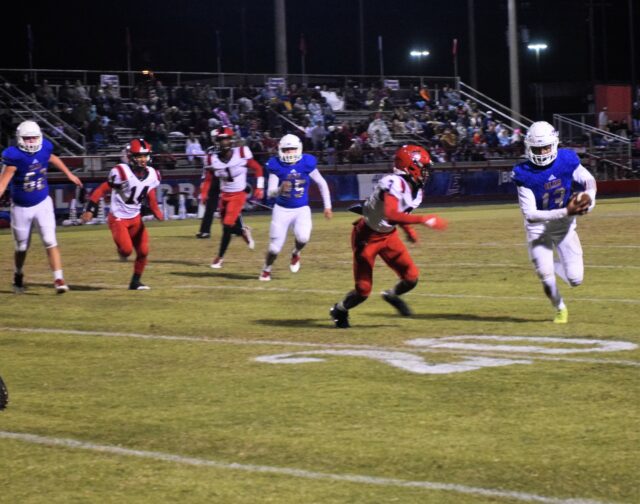 ELKHART – The game came down to the final play. With one second left on the clock, the Elkhart Elks had one last chance to snatch victory from the jaws of defeat against the Coldspring-Oakhurst Trojans.

As improbable as it may have seemed – down by two touchdowns with just over six minutes remaining in the game – Elkhart mounted a comeback for the ages.

Freshman Cale Starr was under center for the Elks as Elkhart took possession of the ball at their own 30-yard line. On first down, Starr connected with Richard Carillo for eight yards. An incompletion on second down put the Elks in a third and two situation, but Starr found Conner Walker for a three-yard gain to the 41.

With a new set of downs, Starr slipped through the Trojans defensive front for eight yards. An incompletion was followed by a seven-yard gain from RJ Moore to move into the Coldspring end of the field.

Starr connected with Moore for eight yards on first down and then found his big tight end – Ky Thomas – for 25 yards on second down to move into the Trojans red zone.

On first down from the 12, Starr picked up seven. Two plays later, Moore burst into the end zone from four yards out to make the score 26-19 with 3:02 left to play in the game.

On the ensuing kickoff, the Elks tried an onside kick but it was recovered by the Trojans at their own 42. Coldspring Head Coach Ken Stanley knew if the Trojans picked up a first down the game would probably be over.

As a result, he went to the ground with Contavious Parker-Harden and Gregory Terry. Parker-Harden picked up two on first down while Terry picked up six on second down. The Elks used their second and third timeouts to stop the clock and with 2:51 left in the game, the Trojans faced a third and two from midfield.

With the game on the line, the Elkhart defense rose up and snuffed Terry on the third down attempt. As the clock moved under two minutes – and with the Elks having no more timeouts – Coldspring made the smart play and punted.

While the kick was a smart move, the end of the play was not as a personal foul against the Trojans set the Elks up at their own 43-yard line.

After picking up an initial first down, three straight incompletions put Elkhart in a fourth and 10 position. Once again, however, Elkhart’s freshman QB came through in the clutch as he found Moore for 18 yards and a first down.

As the clock moved under a minute to play, Starr was sacked by the Trojans defense at the 32. On the next play from scrimmage, Starr found wide-out Messiah Birdow on a 32-yard scoring strike to make the score 26-25 with 51 seconds left in regulation.

Instead of playing for the tie, Elkhart Head Coach Jason Fiacco opted to go for two and the win. He knew a win would put the Elks in the playoffs for the first time since 2014, so he rolled the dice. The try for two was no good and it seemed as if the game might be over.

But, like ESPN’s Lee Corso would say, “Not so fast, my friend!”

The Elks had one more shot. An onside kick was recovered by Elkhart’s Holden Bush at the Coldspring 47-yard line and the Elks were back in business with 48 seconds left.

As the seconds ticked away, Starr completed a 15-yard pass to Carrillo to move inside the 35-yard line of the Trojans and was barely able to spike the ball to preserve enough time for one last chance.

Unfortunately, it was not meant to be as the magic ran out and the Elks fell to the Trojans, 26-25. It will be a bitter pill to swallow as the loss most likely will end Elkhart’s season as they drop to 5-5 on the year.

The Elks, however, are still mathematically alive for the fourth and final playoff spot out of District 11-3A DI. If the Westwood Panthers defeat the Trojans next week, Elkhart, Coldspring and Westwood would all be 2-4 in district play and then it would be up to whatever tiebreakers are used to determine who goes into the postseason.

What a Week it Was!
Meet the 2017-2018 Sandies and Sandiettes
District 22-AA All District Volleyball Teams Announced