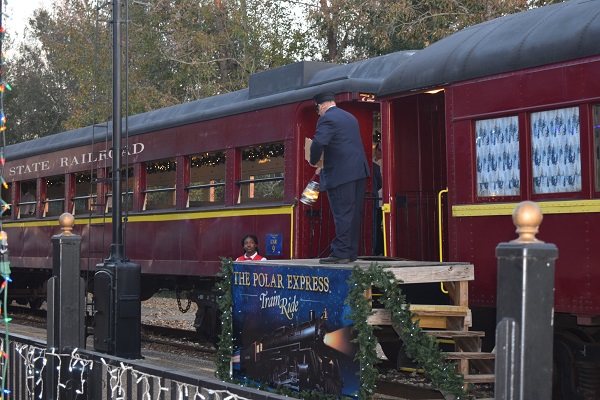 PALESTINE – On a crisp fall, Friday evening, leaves were falling all around the Palestine Railroad Depot as families dressed in their Christmas pajamas waited to board the Polar Express for a magical journey to the North Pole.

The depot was filled with twinkling lights and when the conductor poked his head out of one of the train cars, the lights seemed to intensify in brightness.

Speaking to a young man about the adventure that awaited, the conductor paused, looked out over the platform at the soon-to-be world travelers, took a deep breath and bellowed “All Aboard!”

As the passengers entered the various train cars, they were greeted by the sights and sounds of the Christmas season. Porters helped the families to their seats and once everyone was settled, the Polar Express departed from Palestine on its way to the North Pole.

Once again this year, the Texas State Railroad has created a world of wonder based on the classic children’s storybook, “The Polar Express,” by Chris Van Allsburg. The book was also made into a now-classic movie which wowed audiences worldwide when it was released in 2004.

Following the train’s departure from Palestine, as the train begins to build in speed, the train conductor wanders from car-to-car punching the Polar Express Golden Ticket, just like in the movie.

While the conductor punches tickets, the cocoa chefs roam through the train cars serving hot chocolate and cookies. After the refreshments, the chefs wander up and down the aisles, reciting the tale of the Polar Express from an oversized book so everyone can see.

When the Polar Express arrives at its northern destination – some 30-odd minutes later – Santa Claus and his elves welcome the passengers to the North Pole and then climb aboard the train.

Santa provides everyone with their first gift of Christmas, a silver sleigh bell. Legend has it that only those who truly believe in Ol’ St. Nick can hear the jingling of the bell.

After the jolly old elf has given everyone a sleigh bell, he and his helpers disembark from the train and wish all the passengers a “Merry Christmas and Good Night!”

Once Santa left the train, it slowly began to head back to the depot. The chefs kept the ride back to Palestine lively as they sang Christmas Carols and visited with the passengers.

When the locomotive pulled back into the Palestine station, the passengers were greeted by an array of multi-colored Christmas lights.

Palestine resident Darlene Julian got a chance to visit with her out-of-town family members when they all took a ride on The Polar Express. Along with her for the adventure were daughter Deanna Julian from Austin area; son Daniel and wife Jennifer Julian and their children Gwyn 8, Kierstyn 5, Norah 3, Benjamin 1 from Abilene; son David and wife Jessica Julian and their children Harrison 4, and Catherine 1 from The Woodlands.

“They were so excited about riding the train but when Santa appeared, their smiles said it all! We had lots of fun dancing in the aisles, singing, and ringing those bell,” Darlene Julian said. “Harrison was thrilled to receive the first bell from the North Pole! The cocoa and cookies were a special treat, too. Don’t miss this great way to have a special time with your family!”

Palestine resident Brenda Elias’ son Arthur Elias, 16, volunteers for The Polar Express as part of the Cocoa Crew.  Brenda took her other two children, Michael, 12, and Monida, 9, on Nov. 15, to ride the train.

“They liked the dancers. They liked the hot cocoa, cookies and lights and how they tell the story,” Brenda Elias said. “They like how the decorations make you feel like  you are in the North Pole.”

Fun for all ages, The Polar Express runs from Nov. 16 until Dec. 28. Tickets are going fast so call today to reserve your spot for an adventure to the North Pole.

For more information on the Polar Express please call 855-632-7729 or visit the Texas State Railroad’s website at www.texasstaterailroad.net/events/polar-express/. The railroad depot is located at 789 Park Road 70, Palestine, TX 75801.

Parade, Ceremony Highlight Juneteenth Celebration in Crockett
Color Up for the Kids! 2017 5K Run/Walk
Things that go Bump in the Forest