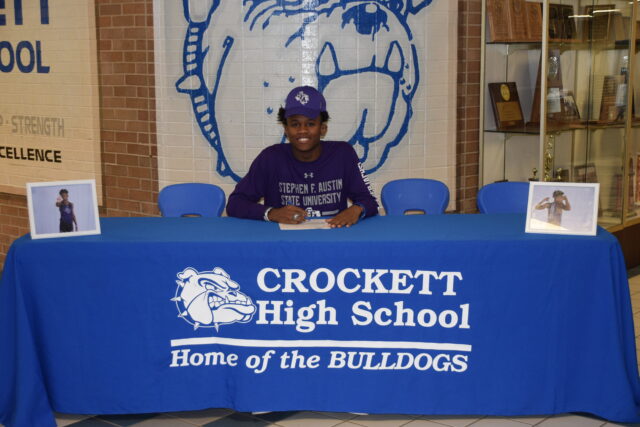 CROCKETT – With a state team championship, a team state runners-up silver medal and a pair of individual golds in the 4X100m relay and the 200m sprint, to say Joseph Porter, Jr. is fast would be an understatement.

Luckily, he slowed down long enough for scouts from Stephen F. Austin State University to catch a glimpse and offer him a scholarship so he might take his talent to the next level.

On Thursday morning, Joseph made it official as he inked his name on a National Letter of Intent to run track for the Lumberjacks.

Once all the pictures had been taken, Joseph took time to speak with The Messenger about his decision to showcase his speed in Nacogdoches.

“It all started when the coaches contacted me. We had been talking for a long while. When I got hurt in my junior year (last season) – I had hurt my hamstring – I asked them if I could come down for treatment. The trainer treated me and they hadn’t even made me an offer. Most of the coaches were from Garrison but they went to school at SFA, so they had a few connections,” he said.

Joseph explained he had been to football camps on the Nacogdoches campus and had developed a good relationship with the coaching staff at that time.

“When I went there, I thought the campus was beautiful. They made me feel at home and it’s only 45 minutes away,” Joseph said.

He first became aware he was on the SFA radar during a football game.

“I didn’t know SFA was looking at me at the time. My coaches knew but I didn’t. They said they had to wait for me to mature and grow up as a young adult. Coach (Ronald) Melton told me he thought I wasn’t doing what I was supposed to do to take care of my job. I wasn’t on the right page at that time,” he explained.

“It started in a football game when we were playing Garrison. This dude, I think he ran a post. I was in the backfield. The quarterback threw the ball and the dude caught it and started running with the ball. I ran him down and caught him before he could score. After the game, an SFA assistant coach came up and asked what my name was and that’s how it started,” Joseph said.

The SFA Track and Field Team is no stranger to Crockett as they had signed hurdler former Bulldog Jordan Washington to a scholarship several years ago.

“I had talked to him and he gave me the run down. After talking with him, I felt like I could fit in at SFA,” Joseph said.

He added he would like to thank his coaches at Crockett High School and his parents “… for pushing me and keeping me on track.”

Asked what advice he had for students looking to move to the next level, Joseph asserted one of the main areas of focus should be “… to keep up your grades. Practice hard, don’t do drugs and stay out of trouble. I feel like if you can maintain your grades, be good in school and stay out of the streets, your time will come. Just be patient.”