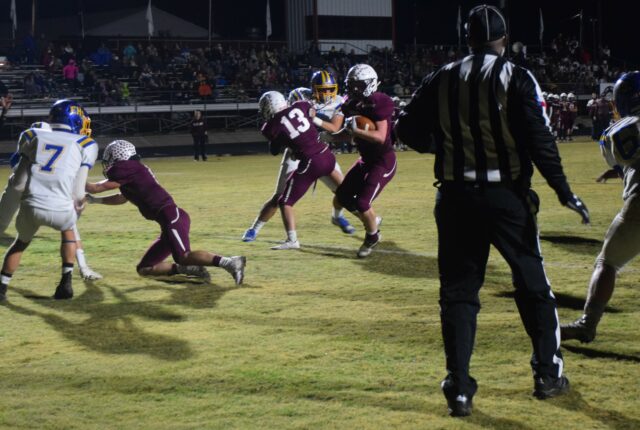 LOVELADY – In their final regular season game, the Lovelady Lions welcomed the Evadale Rebels to the Lions’ Den for a game that would determine which team entered the 2019 UIL Football Playoffs as the #2 seed from District 12-2A DII.

The Lions entered the game with a 4-4 overall record and a 3-1 district mark. The Rebels, on the other hand, were 5-3 overall and 3-1 in district. What looked to be a good match-up on paper turned into a rout after the first quarter as the Lions blitzed the Rebels by a final score of 46-18.

The Lions won the coin toss and deferred to the second half. As a result, Evadale opened the game with possession of the ball at their own 39-yard line. After two plays netted one yard, Rebel QB Klay Sylvester found Bryce Tousha on a curl route, but when he turned up field, Tousha was hit hard by several Lions and fumbled. Lovelady’s Morgan Thrasher pounced on the ball at the 46, which set the Lions up in excellent field position.

Following the turnover, Lovelady came out and rammed the ball down Evadale’s collective throat. Lion RB Josh Martinez set the tempo for the remainder of the game as he picked up one yard on first down, 34 yards on second down and then scampered into the end zone from 11 yards out on Lovelady’s third offensive play of the game. Nick Ochoa hammered home the extra point and with 9:46 left in the first quarter, the Lions led 7-0.

Evadale struck back quickly. After the kickoff, the Rebels took over at their own 37-yard line. On First down, Sylvester dropped back to pass and saw Tousha had gotten behind the Lions’ secondary. Sylvester threw a strike to Tousha who took the rock 63 yards to pay dirt. The extra point was no good but with 9:34 left in the quarter, the Rebels had cut the lead to 7-6.

On the Lions’ next possession, Lovelady mixed in the pass with their running game as they drove 65 yards for their second score of the quarter. Starting at the 35, Martinez picked up nine yards on two carries. Murray then connected with Logan LeBlanc for 20 yards to move the ball to the Rebels’ 35.

As the game moved into the second quarter, the Lions had possession at their own 21. A heavy dose of Martinez moved the ball across midfield and down to the Rebels’ 32. From there, Murray connected with Ochoa for a 32-yard TD to make the score 20-6 at the six minute mark of the second quarter.

Disaster struck on the Rebels’ next possession. Following a Sylvester to Chase Smith completion for 10 yards, Sylvester got greedy and went back to the well. This time, however, Lovelady’s Conner Martinez was waiting.

Martinez stepped in front of the pass at the 46 and began to return the interception up the sidelines. A devastating block by Lovelady’s Peyton Harrison gave Martinez a clear path to the end zone and Martinez scampered the rest of the way for a pick six to make the score 26-6.

Evadale’s luck didn’t get much better on their next possession. Starting at their own 36, Sylvester found Chase Smith for 14 yards but on the next play from scrimmage, Sylvester was picked off again, this time by Logan LeBlanc. LeBlanc returned the ball to the Rebels’ one-yard line and from there Martinez bulled his way over the goal line to make the score 32-6. Ochoa drilled the XP and with 3:17 left in the half, the Lions now led 33-6.

A three-and-out by the Rebels gave the ball right back to the Lions but this time the turnover bug bit Lovelady as Murray was picked off by Evadale’s Tyler Ferguson who returned the ball to the Lions’ 35.

Will Farr moved under center for Evadale and on second down, he completed a pass to the aforementioned Ferguson for 20 yards. With time running down in the half, Farr found Tousha in the corner of the end zone for an 11-yard scoring strike to make the score 33-12 at the half.

The start of the second half saw the Lions using the same formula they used in the first half. Six straight carries by Martinez moved the ball from the Lovelady 35 to the Evadale 20. Eric Anderson picked up six, Murray connected with Ochoa for 13 and then LeBlanc blasted his way into the end zone from the one.

The Lions second half opening drive chewed up nearly half of the third quarter and when Ochoa banged home the extra point, Lovelady led by a score of 40-12 with 6:53 left in the quarter.

The Rebels’ next possession ended with a fumble which was recovered by Lovelady’s Harrison at the Evadale 45.

Once again, Martinez did the heavy lifting as he moved the ball down to the Evadale 16 on three carries. Anderson picked up 12 yards on two carries but a fumble pushed the ball back to the eight. From there, Sean Easterling took it the rest of the way for six points to make the score 46-12.

The Rebels added a late TD to make the final score 46-18. The Lions will be back in action on Thursday, Nov. 14 as they travel to Centerville to take on the Wortham Bulldogs in the Bi-District Playoffs. Kickoff is scheduled for 7 pm.