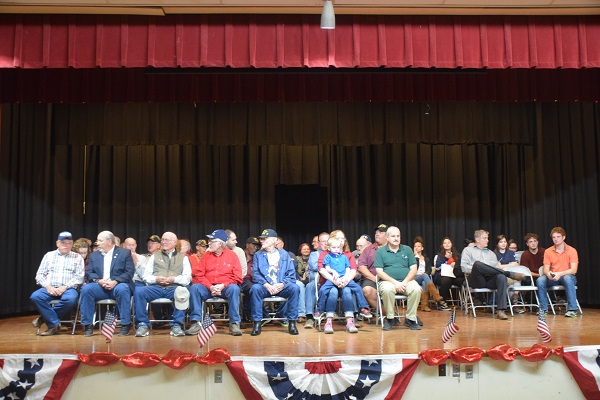 GRAPELAND – Veterans Day fell on Monday, Nov. 11 and while several area businesses and organizations were closed, many others that were open took time to express their appreciation to those who served in the United States Armed Forces.

One such organization was Grapeland ISD as the school invited area veterans to a reception beginning at 9 a.m. followed by an assembly in their honor, held at the Lorena Shoultz Auditorium.

Once the veterans made their way to their seats, pledges to the American and Texas flags were given followed by the playing of the “Star-Spangled Banner” by the Grapeland Sandie Band.

The invocation was given by Bryan Perez-Maldonado and following the prayer, GISD Superintendent Don Jackson welcomed those in attendance.

“Today, we celebrate and honor our veterans for their service to the greatest country in the world, the United States of America,” he said.

After thanking Cindy Huff, the GISD Director of Student Services, for helping to put the Veterans Day program together, Jackson turned the program over to Stacy Perez-Maldonado for a brief history of Veterans Day.

“On the 11th hour, of the 11th day of the 11th month of 1918, an armistice or temporary cessation of hostilities was declared by the Allied Nations and Germany during the First World War, known as the Great War,” she explained.

She went on to trace the progression of the day, first known as Armistice Day, up to 1954 when it officially became Veterans Day.

Huff followed Maldonado-Perez at the podium and led the audience in a moment of silence “… to honor the veterans we have here today, as well as all veterans, for their service to the country and the sacrifices they made so we can have the freedoms we enjoy today.”

Once the moment of silence concluded, the veterans were asked to introduce themselves. Every branch of the military was represented with service members from every era back to the Korean War.

At the conclusion of the poem, Huff introduced Grapeland Junior High teacher Robert Payne – a veteran of Desert Storm – as the keynote speaker.

Towards the end of his address, Payne said, “As we all know, the war to end all wars did not end all wars. So, today we honor our veterans who unselfishly placed their lives on the line for our freedom. Most are just ordinary people who heard the call of duty and answered it. They left their families, their homes and their lives behind not for recognition or fame or even the honor bestowed upon them today. They fought to protect our country and to maintain our way of life. As we honor our veterans, remember their great deeds and also salute those who are serving currently.”

Payne’s oration was followed by a performance from the GHS band which in turn was followed by GHS senior Madi McCombs who recited a poem by Lt. Col. John McCrae, entitled “In Flanders Fields.”

“In Flanders fields the poppies blow between the crosses, row on row, that mark our place: and in the sky, the larks still bravely singing fly scarce heard amid the guns below. We are the dead: short days ago, we lived, felt dawn, saw sunset glow, loved and were loved: and now we lie in Flanders fields! Take up our quarrel with the foe. To you, from failing hands, we throw the torch: be yours to hold it high if ye break faith with us who die, we shall not sleep, though poppies grow in Flanders fields,” McCombs read.

She was followed to the podium by Cooper Ward who provided the audience with the story of Taps after which Grapeland Band Director Moises Santos sent chills through the audience with his rendition of the 24-note melancholy bugle call.

The program’s final presentation was given by Jayden Rodemaker who has enlisted in the Army and will attend basic training shortly after his high school graduation.

He recited what is known as “The Soldier’s Creed.”

“I am an American Soldier. I am a warrior and a member of a team. I serve the people of the United States, and live the Army Values. I will always place the mission first. I will never accept defeat. I will never quit. I will never leave a fallen comrade. I am disciplined, physically and mentally tough, trained and proficient in my warrior tasks and drills. I always maintain my arms, my equipment and myself. I am an expert and I am a professional. I stand ready to deploy, engage, and destroy, the enemies of the United States of America in close combat. I am a guardian of freedom and the American way of life. I am an American Soldier,” the soon-to-be soldier said.

The superintendent closed out the program and said. “Thank you for your service. We appreciate what you have done for our country and we will never overlook the influence you have had on us today. Because of your service, it has allowed us to have the freedom we have today.”

Darling Ingredients Gives Back to Community
Gospel Bluegrass Festival Sees Good Turnout
Rising through the Ranks
Please follow and like us: