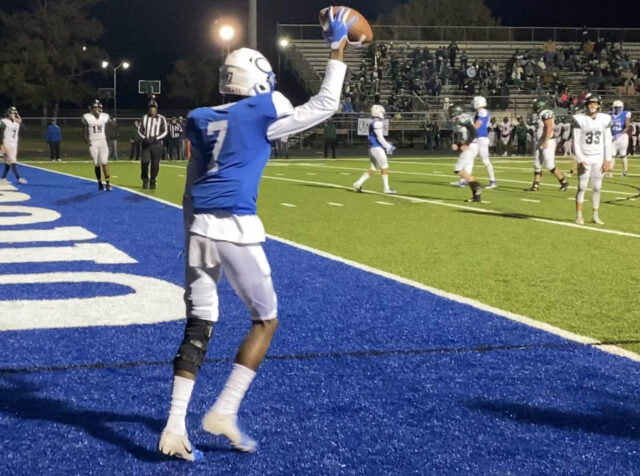 CROCKETT – It was senior night in Crockett and the Crockett Bulldogs gave their senior players a night to remember as they defeated the Franklin Lions by a final score of 60-33.

Crockett came into the game with a record of 7-2 and a district mark of 4-1 while Franklin had an overall record of 6-2 and also had a district record of 4-1. The contest would decide who would enter the playoffs as the second seed from District 11-3A DI and from the outset, it was clear the Bulldogs wanted the higher seed.

Crockett opened up a 20-0 lead before the Lions could get their offense going. After the Lions were stopped on their first possession, the Bulldogs marched down the field and took an early 6-0 lead when Jakecian Jones barreled his way into the end zone with 5:41 left in the first quarter.

Franklin was unable to generate any offense on their second possession and gave the ball back to Crockett with time running down in the first quarter.

On third and nine from the midfield stripe, Crockett QB Jordan Bedford dropped back to pass and saw a wide open Ty White. A busted coverage left White all by himself and Bedford found him with a 50-yard scoring strike with 35 seconds left in the first quarter. Antonio Cruz knocked home the PAT as the Bulldogs took a 13-0 lead into the second quarter.

Following a turnover on downs, the Bulldogs drove right back down the field and Jones powered his way across the goal line for his second score of the game to make it 20-0, Bulldogs.

The Lions finally got on the scoreboard, but the Bulldogs struck back when Bedford found Cristian Brice for a touchdown on a 60-yard bomb. The Cruz extra point made the score 27-7.

Franklin seemed to have finally found its offense and cut the score to 27-14 and had possession of the ball as halftime approached.

Brice stepped up once again as he picked off a pass to give the ball back to Crockett. The Bulldogs launched another drive that ended when Bedford snuck in from the one with eight seconds left in the half. The PAT from Cruz was good and the Bulldogs took a 34-14 lead into the locker room at halftime.

Following the break, Crockett picked up where it left off. On the Bulldogs’ first play from scrimmage in the second half, Crockett wide-out Shannon Bacon got behind the Franklin secondary and Bedford found him with a 61-yard scoring strike.

Bedford wasn’t through, however. He connected with Randy Jones for a 40-yard score and Bacon caught his second TD of the night to make the score 60-20.

The Lions added two late TDs but it was too little, too late as the Bulldogs coasted to the 60-33 victory.

The win gives Crockett the second seed from District 11-3A DI. They will play the 5-5 Anahuac Panthers in the Bi-District Round of the playoffs on Thursday, Nov. 14 in Conroe at Moorehead Stadium. Kickoff is scheduled for 7 pm.