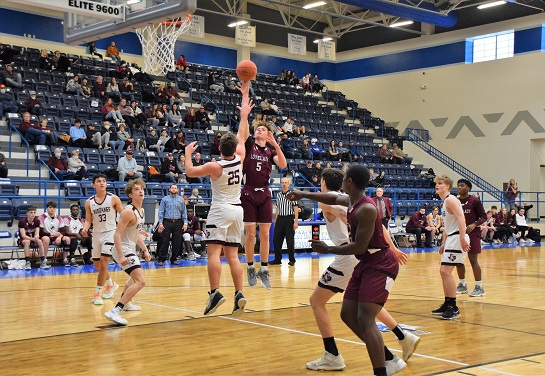 FRANKSTON – After a few delays caused by the winter weather, the 2020-2021 UIL Basketball Playoffs have finally gotten underway as the Lovelady Lions traveled to Frankston to take on the Martin’s Mill Mustangs in a first-round matchup.

Lovelady gave it their all throughout the game but Martin’s Mill showed there was a reason for their ranking as the Mustangs ran roughshod over the Lions to pick up the 90-41 win and advance to the Area Championship.

Martin’s Mill was not flashy, but they played solid D for all four quarters and showcased this in the early going as the Mustangs drew three charges on the Lions on their way to an 18-7 first quarter lead.

Caleb Gilchrist had three for Lovelady in the opening period of play, while Keivon Skinner and Shamar Terry both had two.

As the second quarter began, the Mustangs used a 12-2 run to seize control of the game, scoring 37 points in the period to open up a 55-15 lead by the end of the first half.

Jones lit it up for Martin’s Mill as he poured in 17 points in the second. Powers netted eight as L. Morrow dropped in six and D. Morrow connected on a shot from behind the arc. Christian Moss and Tanner Waynick closed out the Mustangs first-half scoring with two apiece.

The Lovelady second quarter points came from Gilchrist with five and Skinner with two as well as Skylar Pipkin who made one of two from the line.

Following the break, the Lions played much better as their shots finally began to fall. In fact, Lovelady’s third quarter output exceeded their first half point production. Skinner had five and Slade Murray found the scoring column with five of his own. Gilchrist, Terry and Shaun Easterling divided the other six points equally as the Lions found themselves in a 77-31 hole after three quarters were complete.

The Mustangs kept pouring it on as they opened up a 50-point lead at one point in the third. L. Morrow led the way for Martin’s Mill with a pair of three-pointers. Jose Valenzuela came off the bench to score five while Moss had four. Jones added another three to his total while D. Morrow and Waynick both had two apiece to close out the quarter.

To their credit, the Lovelady squad played hard until the bitter end but Martin’s Mill simply had too much firepower. Murray dropped in four in the final eight minutes while Nick Ochoa nailed a shot from downtown. Easterling had two and Gilchrist closed out the scoring by making one of two from the line.

Martin’s Mill was paced by D. Morrow and Moss who both had four in the fourth. Powers and Waynick  had two apiece while L. Morrow closed out the Mustangs’ scoring by making one of two from the line as Martin’s Mill defeated Lovelady by a final score of 90-41.

On the game, the Mustangs were led by Carter Jones with a game-high 22 points. Dylan Morrow put in 19 and Logan Morrow had 17. Colton Powers and Christian Moss were both in double figures with 11 and 10 points, respectively. Tanner Waynick had five and Jose Valenzuela closed out the Martin’s Mill point production with five.

The Lions were led in scoring by Caleb Gilchrist with 11 points while both Slade Murray and Keivon Skinner had nine apiece. Shaun Easterling and Shamar Terry both had four, Nick Ochoa had three and Skylar Pipkin chipped in one to round out the Lovelady scoring on the night.