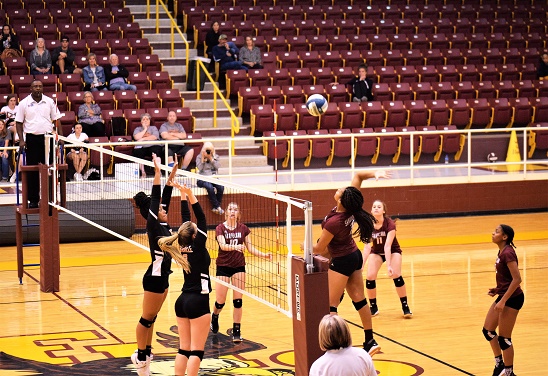 The Sandiettes couldn’t seem to get it going early on and quickly fell behind as the Lady Tigers opened the first set on a 10-2 run.

A block at the net by Grapeland’s Teira Jones seem to give Grapeland some life but just as the Sandiettes started to show some life a controversial net call stopped the Grapeland rally in its tracks.

The Lady Tigers began to pull away and led by a count of 17-7 when a long, dramatic point seemed to turn the momentum in favor of the Sandiettes. Once again, however, an umpiring call brought the Grapeland comeback to a halt when they were called for a double-hit on the ball.

The second set saw the Sandiettes begin to play up to their potential as they stayed within striking distance of the Lady Tigers. Unlike the first set, Centerville was not able to pull away from Grapeland in the early stages of the second set.

Centerville took an early 10-6 lead and eventually pushed the margin out to 18-8. Thanks to the play of Madi McCombs, Cheney Boyd and KeKe Harris, however, the Sandiettes managed to cut the Lady Tigers lead down to three at 20-23 before Centerville was able to put the set away at 25-21.

Set number three saw the two teams playing even in the early stages. Grapeland won the first few points of the set only to see Centerville come back to tie things up at 10. The Sandiettes took the lead for good at 13-12 and eventually opened up a five point lead with the score 20-15.

The Lady Tigers fought back, but the Sandiettes eventually put the set away, 25-18, cut the match to 2-1, in favor of Centerville.

The fourth set saw the Sandiettes and Lady Tigers stay within six points of each other throughout the set. Centerville opened up a six-point lead at 11-6, but the Sandiettes battled back behind the service game of Tatiyana Bowie to cut the lead to 11-9.

Grapeland tied things up at 13 and eventually took an 18-15 lead. Centerville battled back to tie the score at 19 but a spike from Bowie gave the Sandiettes a 20-19 lead.

Centerville fought back to tie the score and then opened up a 24-21 lead. Grapeland cut the lead 24-23 and looked to have regained the momentum, but an error at the net gave the Lady Tigers the last point they needed as they took the fourth set by a score of 25-23 and won the match by a count of three sets to one.

Even though the match didn’t turn out the way Grapeland fans had hoped, the Sandiettes should be congratulated on a great season.