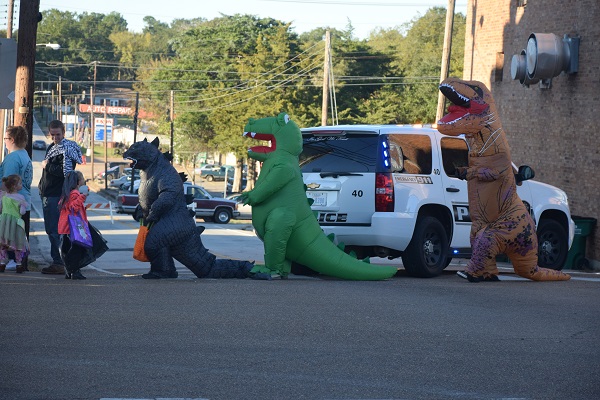 CROCKETT – While not quite the zombie apocalypse, the undead arose from their crypts and were out in mass force seeking to take what they could from the merchants of Crockett. It wasn’t human flesh they were after… it was candy!!

They zombies were joined by football players, fairy princesses, pirates, witches and all manner of ghosts and ghoulies roaming the downtown streets of Crockett.

Spooky sounds of Halloween filled the evening air as bands of costumed marauders moved from place to place seeking the bounties to be plundered. One could almost hear Vincent Price in the background saying, “Darkness falls across the land, the midnight hour is close at hand. Creatures crawl in search of blood, to terrorize your neighborhood.” The only thing missing was the howl of a wolf.

The festival of fright, known as Halloween on the Square, announced its start with a ghastly scream as superheroes fought the forces of darkness for a place in line to receive the sweet treats being passed out by local businesses and business owners.

One young man dressed as the Dark Knight said he looked forward to this every year and added, “I came with my mom last year and was a pirate. This year, I’m Batman!”

Just behind the Caped Crusader, a young lady was dressed as a fairy princess. She waved her wand as if casting a spell and said she was trying to make the crowds disappear. “I want to see what candies I can get. I like chocolate!” she exclaimed

In front of Lee’s China Inn, a mini Dallas Cowboy said this was his first year to attend the Halloween extravaganza. The pint-sized Dak Prescott said he was five and added while he liked all the costumes, “Next year, I want to come as a scary monster!”

A wee witch cackled with glee in front of Davy Crockett Drug as her goody bag was filled. “Look at what I got!” she squealed. “They give away lots of stuff!”

Over by the Courthouse Annex, a young man dressed as a cowboy said his name was Eddie. A seasoned veteran of the Halloween festivities at the ripe old age of nine, Eddie said his favorite part of the evening was “….the candy. I like the chocolate bars.”

As the sun began to sink below the horizon and the witching hour of 7 p.m. approached, a mummy walked by. Accompanied by his parents the mummy revealed his guarded treasures stored in an orange jack-o-lantern. “Everyone was so nice and they gave us all a whole bunch,” he said.

When witches go riding and black cats are seen – the moon laughs and whispers – ‘tis the night of Halloween.