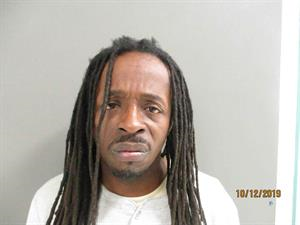 CROCKETT – A Dallas man was arrested and taken off the streets after the 18-wheeler he was driving struck a pole. A subsequent search of his truck yielded a quantity of phencyclidine (PCP).

Alton Brushon Shields, 43, was charged with possession of a controlled substance, penalty group one, evading arrest, striking a fixture or highway landscape and failure to take a truck route, all stemming from his actions on Saturday, Oct. 12.

According to an affidavit of probable cause, Crockett Police Department Sergeant Andrew Allen was on patrol Saturday afternoon when he was dispatched to the intersection of Terrell Street and South 7th St. in reference to a tractor-trailer striking a pole.

When the police sergeant arrived, the affidavit reported Allen “… observed an 18-wheler at the intersection of South 7th Street and San Jacinto Avenue attempting to make a turn with significant damage to its trailer. The driver, Alton Shields, looked at me and then began to drive down San Jacinto Avenue towards 6th Street.”

In the report, Allen stated he activated his sirens to try and get Shields to stop. Shields, however, did not stop and kept going until he arrived at another intersection, where a vehicle was stopped.

“I then approached the driver’s side of the vehicle and ordered Shields out at gun point, to which he complied,” the affidavit stated.

Allen questioned Shields about where he was going to which Shields replied he was hauling cargo from Houston to Dallas and was trying to get back to I-45.

Shields was given a field sobriety test, but Allen “… did not receive enough clues to be comfortable arresting him for a DWI.”

While he was not charged with a DWI, the truck driver was arrested for striking the pole, not taking the correct truck route and evading arrest or detention in a motor vehicle.

Lieutenant Lonnie Lum also responded to the scene and “… while inventorying the vehicle for tow, located a small bottle inside a Swisher Sweets bag that contained a yellow substance in it. Upon field testing the substance, it was determined to be PCP (phencyclidine).

Shields was transported to the Houston County Jail where he was booked into custody on two felony and two misdemeanor charges.

The most serious of the crimes, the evading arrest charge, was considered as a third degree felony because of Shields’ previous conviction for the same crime.

Shields is being held at the Houston County Jail on bonds totaling $17,500.