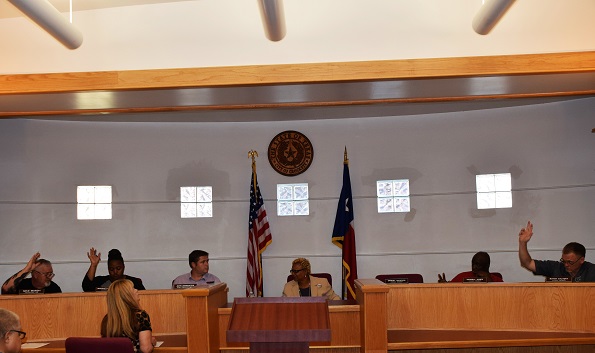 CROCKETT – The city of Crockett has a new budget for the upcoming year following a meeting of the Crockett City Council held on Monday, Aug. 12.

With no public comments, the meeting began with a public hearing on the proposed budget for the Fiscal Year (FY) 2020 budget.

“Council, the only comment I would like to make – I have made copies for you because I want to make sure you have the latest and greatest – if council approves in moving forward on (agenda) item eight , which is a school resource officer for the school district, the budget includes the revenue and expenses for that. Up until now, it did not show the revenue coming in,” City Administrator John Angerstein said.

With no further comments, the public hearing was closed. A motion was made, seconded and approved to adopt the FY 2020 budget.

Once the budget had been adopted, the next item on the agenda was a public hearing on the tax rate.

“Just to go over this quickly, this year’s proposed tax rate is the same as last year’s tax rate (0.596791 per $100 of property valuation.) This provides the necessary funds to cover the budget we just approved. This brings in additional funding for the budget with the emphasis on streets without having to raise taxes, using the (Houston County) Appraisal District’s latest appraised property value,” the city administrator said.

As the meeting continued, an ordinance to increase the sewer meter fee was discussed.

“There are no tax rate increases, no water or sewer rate increases but the SSO fee, the meter fee, which used to be $1.06, this ordinance increases the fee to $3.80 one-time per month,” Angerstein said.

The increase will provide for the salary of a sanitary sewage overflow technician and an additional $82,472. Angerstein explained $75,000 of this would go for SCADA upgrades to the sewer plants which will help with monitoring of the system. The ordinance was approved.

The final agenda item concerned a memorandum of understanding (MOU) between the Crockett Police Department and Crockett ISD concerning a school resource officer.

Crockett Police Chief Clayton Smith said the MOU called for the school district to fund 10 months of a police officer’s salary who was dedicated to the school. The remaining two months would be funded by the police department and had been budgeted.

The MOU was unanimously approved.