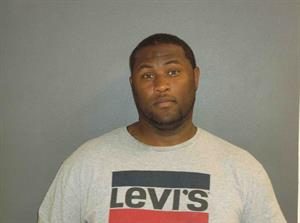 CROCKETT – An argument between a girlfriend and boyfriend ended poorly for the boyfriend after he was charged with two felonies for ramming his car into hers.

According to an affidavit of probable cause, Leonard Deshawn Wiley, 32 from Crockett, was taken into custody on Monday, April 8 and charged with aggravated assault with a deadly weapon, endangering a child and driving with a suspended license after he crashed his car into his girlfriend’s vehicle.

The affidavit reported Crockett police officers were dispatched to the Davy Crockett City Park in reference to a call for service, at approximately 6:40 pm.

“Dispatch advised that there were two vehicles driving recklessly in the park and running over equipment,” the affidavit stated.

Contact was made with the complainant who advised officers “… the Mustang backed up and floored it into the silver Cobalt.”

The officers also made contact with the driver of the Mustang, later identified as Leonard Deshawn Wiley.

Wiley told the officers “… he was coming from the car wash when he parked at this location with his sister. His sister was in another vehicle next to Leonard and explained that they had been there and didn’t know any silver Cobalt.”

A different story, however, emerged when officers spoke with the driver of the Cobalt, who was identified as Wiley’s girlfriend.

The girlfriend, whose car which was parked on top of a pole, advised officers she and Wiley had gotten into an argument “ … and Leonard hit the Cobalt with his Mustang, causing it to knock down a pole. Leonard also had his niece in the vehicle while he was acting recklessly, which he tried denying.”

Wiley was taken into custody and transported to the Houston County Jail where he was booked into jail on charges of aggravated assault with a deadly weapon, endangering a child and driving with a suspended license.

A third degree felony is punishable by a term of incarceration of between two and 10 years, along with a fine of up to $10,000.

Wiley is being held at the Houston County Jail on bonds totaling $14,500.