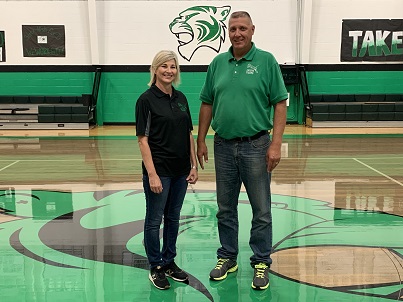 LATEXO – With the 2018-2019 school year beginning to slip below the horizon and with administrators having had a chance to catch their breath, we thought it would be a good time to review the highlights and challenges of the past year in education and see what the various districts have on tap for the 2019-2020 school year.

In the third part of a multi-part series, The Messenger caught up with Latexo Independent School District (LISD) Superintendent Michael Woodard and Latexo High School (LHS) Principal Kim Watson to get their thoughts on last year and to see what they believe is in store for the coming school year.

“One of the biggest highlights this year was winning the math UIL state championship for the eighth year in a row. That has to be a state record – in anything. I’ve thought about it and I can’t remember anyone doing something like that,” Woodard said.

On the other side of the coin, the LISD superintendent said, was the athletic program.

“We want to put out a good product which is the reason we’ve made some of the changes we dis. We have good kids here. Once they see some success in the athletic arena, I think that will take off, as well,” Woodard said.

“We have a good younger bunch coming in,” he continued. “Hopefully we can build off of that. We have had success in cross country and golf, but we want that success across the board.”

“Absolutely,” Woodard agreed. “We’re kind of special out here with our transfers. We get some of the better kids here and we know that. I think our STAAR scores are also something we’re proud of. We’re pretty consistent.”

Facility-wise, the district has had a complete overhaul during the summer, the superintendent explained. He said the district had a dedicated crew which helped clean and paint the buildings in preparation for the upcoming 2019-2020 school year.

“Next week, we will be outside manicuring the lawns before the teachers get here. The rooms were re-done. We have a new fence out by the elementary playground because of the road coming in to help keep the kids out of that road area while they’re outside playing,” he said.

In regards to roadways, one area the district has struggled with in the past several years has been the traffic congestion in front of the schools, but Woodard indicated that issue was being addressed.

“That’s a work in progress with the city street coming in (to the campus). The city had a grant to pay for it and put it in. We will flow the traffic out through another street. It gets congested up here with everyone trying to get back out to the highway. The outbound traffic will be using that side street to get back to US 287. That should be completed before school starts,” he explained.

Other highlights, the LHS principal said, included the CTE (Career and Technical Education) program which gives high school students the chance to get a head start on preparing for college and careers.

“We have a director. Mr. (Chris) Cravens is going to be in charge of that. We have hired some good personnel for those positions and hopefully we can build up the Ag Department. We are also working on public health service endorsement,” Watson said.

“We’ve also re-done the portable buildings for the health service classes. One is a hospital lab situation and the other will be used for instruction,” the LHS principal said.

“If we had a student who took the AP exams and if they’re in the classrooms for mathematics and English, if they took all of the college courses they could take, they would have 47 hours,” Watson said.

“We are going to add the EKG (electrocardiogram) certification this year and hopefully after that, the CNA (certified nursing assistant),” Watson said.

One of the challenges faced by the district in the 2018-2019 school year was a decline in enrollment.

“I think we lost several of our young students, elementary students, for whatever reason. I don’t know why we lost them, but we are trying to get them back now. We have got to get those numbers back up. The elementary is going to feed your high school. You want bigger numbers down there so you can have bigger numbers up here,” Woodard explained.

Changing gears, somewhat, Woodard was asked about the pay raises the faculty and staff will receive in the upcoming school year.

“HB 3 was big for us. The state finally threw some money back into the smaller school districts. We were fortunate to be able to go above the new pay scale – $3,500 above. That is how much our board believes in our district and our teachers. They (board members) were very vocal in what they wanted and how they wanted to go forward. It makes it easy to be superintendent when the board is willing to do what is best for the district and that’s where we are at,” he said.

Another new item in the 2019-2020 school year will be a new janitorial service for the district.

“We have everything looking new and fresh and we want to keep it that way,” he said.

Asked to provide one thing to look forward to in the upcoming year, Watson commented, “Morale. Not just the pay raises but some of the new programs we are offering and some of the new classes the teachers will be involved in. We have a new strong math teacher on the high school campus. I think the kids are happy about that. Just the change in the atmosphere of the school that we’re working on – I think that is going to be a big deal.”

“I think this is the strongest staff we’ve had in a long time,” she added. “I really don’t see any holes in academics.”

“We’ve just been adding to what we already have to make it better and stronger,” Woodard said.