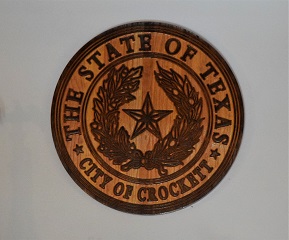 CROCKETT – After tabling a decision on the acceptance of a $2 million grant last week, a special meeting of the Crockett City Council was called to further discuss the matter.

A part of the grant had originally called for an upgraded natural gas line to be included in it, but when it was discovered the current gas line was privately owned, it had to be removed from the grant because of federal regulations.

The Crockett Economic and Industrial Development Corporation (CEIDC) had initially agreed to put up $250,000 of the $500,000 match but when the gas line was removed from the grant, CEIDC Executive Director James Gentry indicated he should obtain guidance on the matter from the CEIDC board.

After the CEIDC Board had an opportunity to discuss the matter, a meeting of the council was called on Monday, Aug. 10 to re-visit the grant acceptance.

City Administrator John Angerstein informed the council he had met with the CEIDC earlier in the day “… and they agreed to provide matches up to $133,000. Essentially, the $250,000 that they had agreed to allocate as the necessary funds for the gas lines, they took out $117,000 for the gas line.”

Angerstein said that would leave the city with a match of $367,000 to make up the difference.

A motion was made, seconded and unanimously approved to accept the grant.

The next item of business concerned the approval of an interlocal governmental cooperation contract for management services for the economic development administration grant between DETCOG and the city of Crockett. The measure was unanimously approved.

Authorized signatories for the grant were also approved. With no further business, the meeting was adjourned at 6:10 pm.