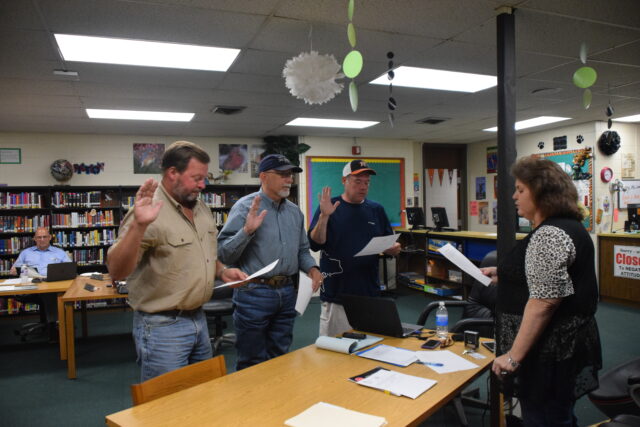 LATEXO – The Latexo Independent School District Board of Trustees met in a regularly scheduled meeting on Thursday, June 13 and opened the conclave with a change as they immediately went into executive session.

Approximately 45 minutes later, the board members emerged from behind closed doors and began the open portion of the meeting.

The first order of business was the installation of board members. Board President Kelly Nicol, along with Board Members Chris Morris and Richard Smith were administered the oath of office as they begin their new terms serving on the school district’s governing body.

“The governor signed House Bill 3 into law this week so we are still trying to get all that formulated for the school year with teacher raises. The gist of this is with the new funding, 30% of the new formula must be used to provide for teacher raises. I’ll probably be able to tell you more about what that will look like during the next board meeting,” the superintendent said.

As the meeting continued, STAAR test results were presented to the board. 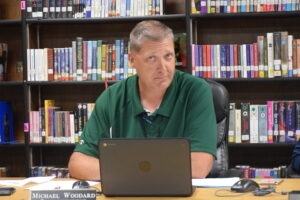 “Our scores are good this year,” Elementary Principal Sandy Simpson said. “We went up in every grade level in reading. The fifth grade scores came back and we don’t have any fifth-graders taking the third test. In math, we had some really big jumps in some grade levels but some went down a little. Even in the one that went down, you can see they came up 10 points from where they were last year. There is tremendous growth any way you look at it. Writing came up significantly and science came in really strong this year.”

High School Principal Kim Watson spoke next and went over the junior high STAAR scores and the End of Course scores for the high school.

“I would say the high school scores overall were basically the same as last year with a few variations,” she said.

Watson added because of the district’s size, it only took one or two students to see a significant change in the scores.

“Our junior high STAAR scores were a little bit different. Our social studies scores looked like they came up. Remember, the students have to pass the reading in 8th grade and the 8th grade math test. They have three tries to pass that test or they can go before a committee or they can be retained. We do have a couple of kids in summer school who have to pass on the third time,” she said.

“I told her there was no pressure on her as a freshman but now she has to win three more times,” the HS principal said with a laugh.

“We were third in the state academically (in UIL competition) behind our arch nemesis Sabine Pass and Lindsay. We weren’t too far behind Lindsay for second. So, we’ll try harder next year but we did get a really big trophy for third place,” Watson said.

Before the meeting was adjourned, the LISD superintendent introduced the newest LISD employees – William Dugat and Madison Dunn – to the trustees.

Dugat will serve as the Dean of students. He has 17 years of experience in education and was most recently with Lufkin ISD as junior high principal.

Dunn, from Oakwood, is a recent graduate from Sam Houston State University and will serve as an FFA advisor.