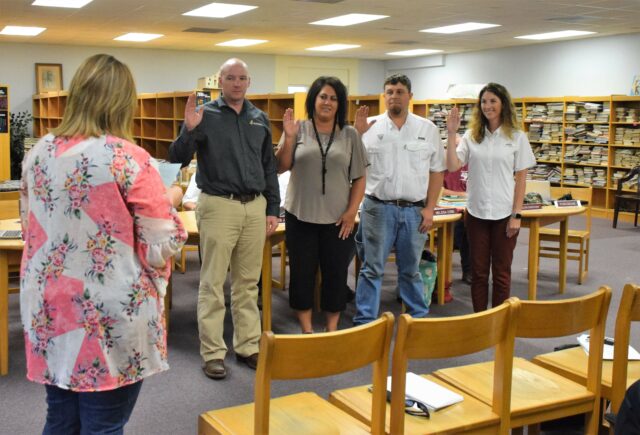 GRAPELAND – The Grapeland Independent School District Board of Trustees met in a regular meeting on Thursday, May 30 to swear in board members and to reorganize the board’s officers.

Board President James Martin requested board members Brad Spisak, Kendra Huff, Melissa Cobb and Ryan Richie to stand in order for Business Manager Julie Martin to administer the oath of office to the trustees.

Once the oath of office had been administered, Martin expressed his appreciation to outgoing Board VP Eddie Childress, who decided not to run for re-election. Spisak was unopposed in the election and will fill Childress’ position.

“Before Eddie runs off on us, I want to thank him for all the guidance he has given us. Eddie was president when I got on the board and he has led us to a very good place. As I told him in closed session, we are going to try and keep moving in the positive direction he has helped lead us in. I was very fortunate when I took over as president because Eddie has been an awesome mentor. We are going to miss him and his experience. I think he has helped us all a lot and we still have his cell phone number,” Martin said with a laugh.

GISD Superintendent Don Jackson spoke next and commented Childress was board president when he was hired.

“He worked closely with me to teach me the ropes and I appreciate that. He was not afraid to tell me when I was wrong and he was the first to pat me on the back when I was right. I appreciate him being honest with me and I will still seek his advice,” Jackson said.

After several other board members sang his praises, Childress provided the board with some heartfelt remarks.

after 2000 because my son was a senior. I had been asked to run for the board but I didn’t want to until after my son had graduated,” Childress said.

However, when Gregg Spivey took over as superintendent, Childress said that all changed.

“We were able to see a vision of moving this school district in a direction we hadn’t seen in a long time. The years before he was here, to be honest, it seemed like we were floundering at times as a district and as a board. Mr. Spivey came to us and he brought something we hadn’t had in a long time. Number one, he had been a superintendent for a long time. The vision came back and through that came the elementary school, the daycare and the three-year-old Pre-K. All of these things happened because the vision changed,” he said.

He explained most students would not receive an athletic scholarship and when they graduated from GHS, they would either go to work, go to college or do something else.

“But,” he cautioned, “We have to prepare them for those things.”

Before he concluded, Childress asserted, “This is the greatest school district in my opinion. I didn’t graduate from here, but it’s the greatest school district I have ever been a part of. We have great teachers. Could we do more? Sure. I wish we could pay our teachers more. I wish we could do so many things but then we come back to reality. What’s the biggest bang we can get for our buck?”

“I feel like I’m walking out and turning it over to great people. The vision will continue,” he said.

After a standing ovation for the outgoing VP, the new board officers were elected. James Martin was re-elected as president, Melissa Cobb was elected as vice president and Kendra Huff was elected as secretary.

As the meeting continued, Cobb introduced Christie Hill as the new administrative coordinator for the Grapeland ISD Early Learning Center.

Hill said she had been at South Side Baptist Childcare Center in Palestine for 22 years and had worked her way up from a janitorial position.

Cobb added the first state inspection of the ELC would be on Monday, June 3 and the facility was set to open on Aug. 5. In addition, the newly elected VP said there were already 25 students enrolled in the program.

Elementary Principal Cassie Satterwhite followed Cobb and informed the board, as well as those in attendance, she had requested the elementary teachers to have all of their personal belongings out of the old elementary school building by June 21.

“The furniture for the new school should be delivered on July 22 and they will be there for three days to set it up and move the furniture into the classrooms. I’m looking at July that we will be able to get into the new building with teachers,” Satterwhite said.

Prior to tending to the election matters, GISD Athletic Director Terry Ward announced a new softball coach had been found.

and educators for this district. So far, I think we have done a pretty good job. Of course, we had a softball position which opened up and we were looking for somebody pretty special,” the AD said.

He explained several candidates had been interviewed “… but we felt like with that job and the expectations we have, we wanted someone who would be a great role model for our girls. That was important to me. Not just a good coach, but we wanted a role model and I think we found one.”

With that, he introduced Kaylee Parker as the new softball coach. Ward also provided some background information on her saying she had been a part of two state championship teams at Hudson High School, went to Angelina College for two years and then received a Division 1 scholarship to Bowling Green State University.

“She has experienced softball at the highest level and that is definitely something our girls can feed off of. They can talk to her about it and also – she’s just a good person,” Ward said.

Once the Ad concluded, Parker addressed the school board and introduced herself.

She explained she had just recently returned to the area from Ohio where she played at the D-1 level. Parker also said her first year of college ball was at Pensacola State in Florida but because of family health issues, she moved back to the East Texas area and started playing for Angelina.

“I was named All-American, All-Conference and All-Region while I was Angelina and then luckily Bowling Green got me so I moved up there,” she said.

A motion was made, seconded and unanimously approved to hire Parker as the Sandiettes’ new softball coach.