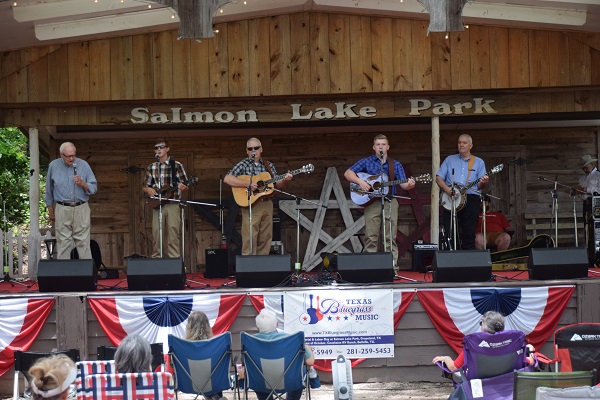 GRAPELAND – Normally, many of the of the attendees at the Annual Floyd Salmon Memorial Day Weekend Gospel Bluegrass Festival pack up and head home after the Devotional held on Sunday morning.

However, this year’s event kept people coming in late just to get a little taste of that down home gospel bluegrass sound.

“We’ve got nearly 200 campers still in here. Normally, we have the devotional on Sunday and I come back up here after they start playing again, stay for an hour or two and then I’m gone,” Festival Manager/Promoter  Collee Biller-Littlefield said on Sunday afternoon.

“Today, however, the music started back up over an hour ago and we’re still here! That’s a good thing, she said.

“The weather plays a major part in all of this,” she continued. “It has been just beautiful this weekend. It rained beforehand which settled the dust and people come out when the weather is nice. I’ve had quite a few people come back and pay for an extra day.”

“They have taken great care of the park and they have been really good about making sure everything is up and running. The cabins were cleaned better this year and the lake was cleaned. They went around power blasting all the concrete and painted it as well,” the promoter said.

“We also got new bathrooms! That was Floyd’s (Salmon) idea, but he just didn’t live long enough to see them finished. He moved the building in and then we drew the design up on the floor,” Biller-Littlefield said with a laugh.

One of her few laments about the weekend, she said, was they were unable to get the washers and dryers in place for the Memorial Day Festival.

“The first few days of the Festival were fantastic. A lot of people came in with their campers. I’m excited to see the final numbers when we get them all finished up. On the first day, we had 45 campers (RVs, etc.) and I don’t know how many cabins were rented. The next day, we had 54 campers come in and then just a bunch of individuals who drove in to buy tickets,” she said.

Friday was another big day but Saturday took the cake, Biller- Littlefield said.

“Ticket sales were off the charts for us and we still had 18 more campers coming in. We only had one performer who couldn’t make it and that was Christian Davis,” she said.

As to the big draws this year, the promoter said a combination of the headliners helped attract the large crowds. Performers like The Marksmen, The Baker Family, Williamson Branch, The Farm Hands, David Davis, and Catahoula Drive all helped attract the many visitors to Salmon Lake Park.

Changing gears somewhat, Biller-Littlefield said she was already planning for the Labor Day Bluegrass Festival during the last part of August and early September.

“We have The Grascals and The Malpass Brothers coming in. Those are our headliners Friday and Saturday. They will draw a crowd. I just hope it’s not too hot, but if it is, bring a fan!” she laughed.