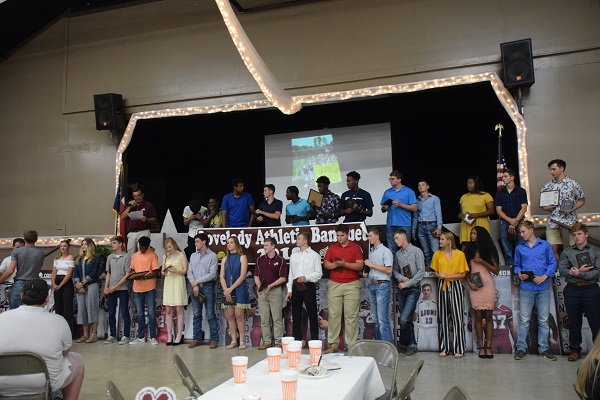 Coach Jon Lowery Honored for his Service to LISD

LOVELADY – It was an emotional night in Lovelady as school district said goodbye to several senior athletes as well as longtime teacher, coach and Athletic Director Jon Lowery.

Once Shupak finished with her opening remarks, she asked Pastor Jordan Johnson to come forward to provide the invocation. Following the prayer, the attendees were treated to a wonderful dinner of chicken or steak, prepared by members of the Booster Club.

After dinner was served, the first awards of the evening were presented to the athletes. Leading off the event was the presentation of the Jacob Howard Scholarship, presented by Coach Richard Gunnels and April Howard. The $1,500 scholarships were awarded to Jay Thomas Robinson, Makayla

Coach Lowery assumed the podium once the scholarships had been awarded and extolled the virtues of the athletic teams. He also introduced the members of his coaching staff.

Following the team introductions, Coach Lowery presented the male and female athlete of the year awards to Kaiden LeMaire and Jay Thomas Robinson.

The next presentations of the evening were $1,000 scholarships from the Booster Club. The scholarship recipients were JR Cousins, Chad Fulgham, and Logan Lowery.