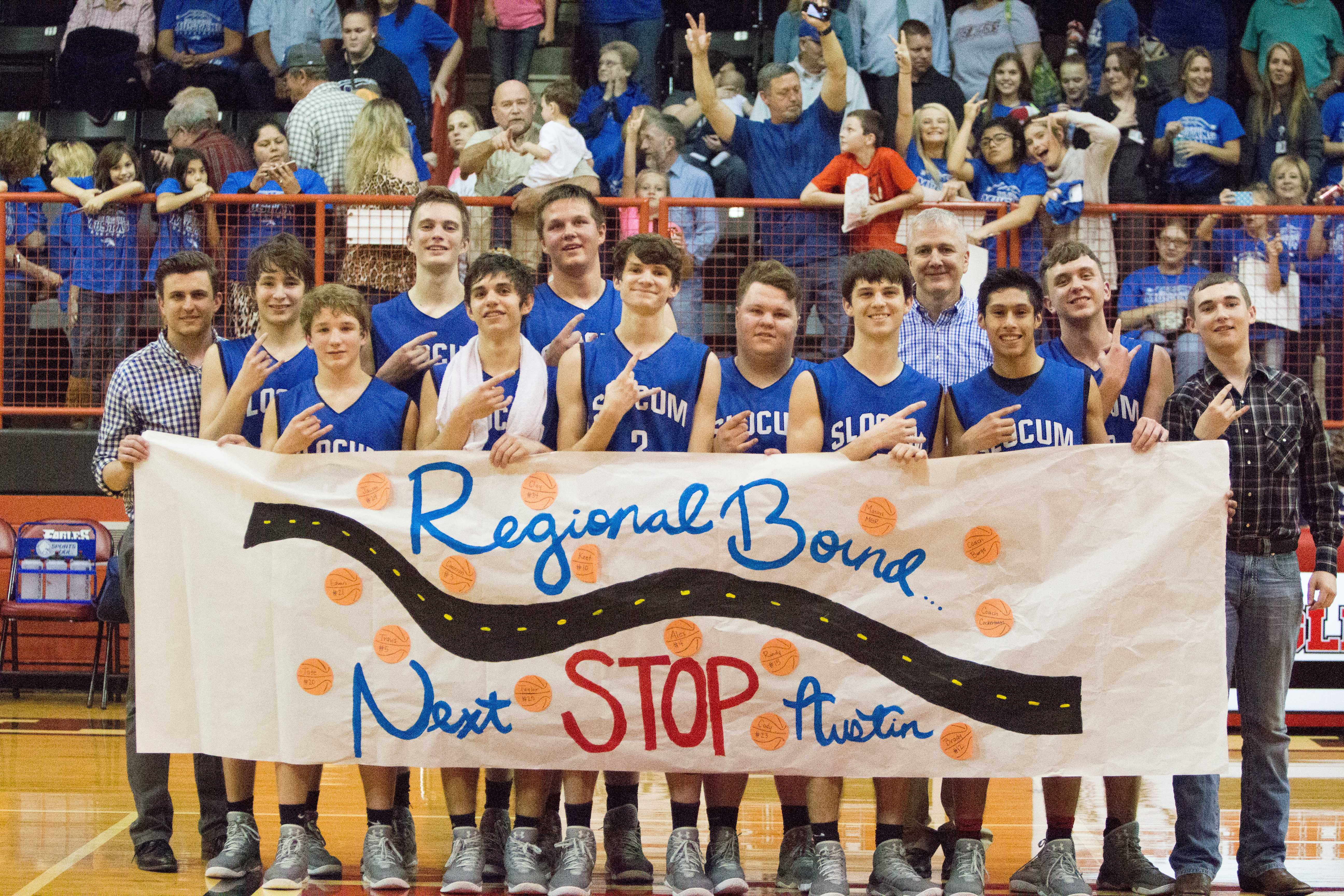 RUSK – The Slocum Mustangs had experienced an up and down season all year long, but when the postseason tipped off in late February, the Mustangs seemed to finally come together as a cohesive team.

The Mustangs crushed the Chester Yellow Jackets in the Bi-District round of the playoffs by a score of 71-44 and then swatted the Coolidge Yellow Jackets by a final of 71-62. 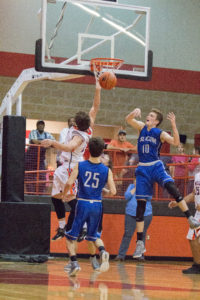 After disposing of the pesky insects in the first two rounds of the playoffs, the Mustangs faced a crew of swashbuckling Pirates from Wells in the Regional Quarterfinals.

The battle for a place in the Region IV Tournament in Austin was close throughout the first two quarters, but an 18-4 run in the third period by Slocum helped sink the Pirates and propel the Mustangs into the Regional Semifinals with 56-31 victory.

The game started out with both teams struggling from the field. Slocum managed to get going after the four minute mark and put up 12 points in the first period. Alex Maldonado led the charge with five points while Keet Cockerham had four and Taylor Hunt had three.

The Pirates only managed to connect on two shots from the field on 3-pointers from Lanberto Aguillon and Jace Watson while Tyran Morgan added a free throw to make the score 12-7 after the first eight minutes of play.

As the second quarter got underway, the Mustangs seemed to find their range from behind the three point line. Maldonado drained a pair of 3-pointers for six while Hunt knocked down a three of his own. Cockerham added two and was joined by Jacob Lane with a basket to make the halftime score 25-18.

The Wells’ second quarter points came from Aguillon and Landon Smith with five apiece while Morgan made one of two from the line. 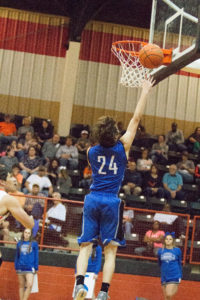 mentioned earlier, the third quarter belonged to the Mustangs as they held the Prates to only four points on two-pointers from Morgan and Gerardo Aguillon.

While the Pirates struggled from the field, Lane caught fire for Slocum as he poured in nine third quarter points. Maldonado dropped in five while Hunt and Travis Neal netted two apiece to make the score 43-22 with eight minutes remaining in the contest.

Wells simply didn’t have the firepower to make a comeback and only scored nine in the final frame. Dalton Herman dropped in four points while L. Aguillon drained a three and G. Aguillon converted two shots from the charity stripe.

Slocum was led by Cockerham with five and Lane with four. Brady Bennett and Cody Bitz both added two for the Mustangs to make the final score 56-31 and send the Mustangs to the Regional Tournament.

The Pirates were led in scoring by Lanberto Aguillon with 11 points and Landon Smith with five. A trio of Pirates – Gerardo Aguillon, Dalton Herman and Tyran Morgan – all had four, while Jace Watson netted three.

The Mustangs were paced by Alex Maldonado with 16 points and Jacob Lane with 15. Keet Cockerham had 11 and Taylor Hunt dropped in eight. Brady Bennett, Cody Bitz and Travis Neal all had two points apiece to round out the Mustangs’ point production in the game.

The win moved the Mustangs to the Regional Tournament where they faced the Dime Box Longhorns on Friday, March 3. As of press time, however, the final score was unavailable.