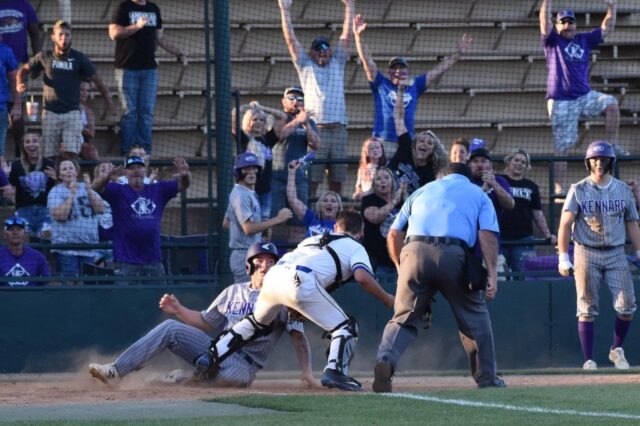 16-4 Win Sends Tigers Back to State

KILGORE – After a heartbreaking loss to the Union Hill Bulldogs the previous evening, the Kennard Tigers’ dreams of a return trip to Round Rock were in serious jeopardy. Following a perfect game from Dylan Cole on Thursday that led to a Kennard 10-0 win, the Tigers dropped Game Two on Friday on a walk-off sacrifice to lose 5-4 and square the series at one apiece.

A loss on Saturday would put a halt to the Tigers’ hopes of taking the next step and bringing the Class 1A State Championship home to Kennard. Union Hill, on the other hand wanted nothing more than to send the boys from Kennard packing and in the first inning it looked like they just might.

Cole had only thrown 59 pitches on Thursday – well within the UIL mandated limit – and got the start on Saturday evening. After getting Logan Dunn to tap back to the mound, the Bulldogs finally got a hit off of Cole when Saige Hendrix roped a double into the left field gap.

Matthew Massengill also got a hit off of Cole and his single to left knocked in Dunn to give the Bulldogs an early 1-0 lead. Daniel Dunn followed with a single of his own to move Massingill to second but when he tried to swipe third with Carlos Mendoza at the plate, Kennard’s Jaden Kulms gunned him down at the bag. That seemed to be a wake-up call for Cole as he struck out Mendoza to end the top half of the inning.

When the Tigers came in from the field, they blew the game wide open, giving Cole all the run support he would need.

Kulms led off with a walk and scored when Elijah Dowdy doubled. A single from Cole pushed Dowdy across the dish and after Keyton Lumbreraz sacrificed Cole to third, Ryan Pilkington drove him in with a rip up the middle. Caleb Alfred singled to center to move Pilkington to third. Alfred stole second and when a called third strike was mishandled Adrian Montero broke for first while Pilkngton slid home to make the score 4-1. A walk to Nick Farmer and a passed ball allowed Alfred to trot home and make the score 5-1 by the end of the first.

Cole worked a 1-2-3 second inning and when the Tigers took their turn at-bat, they added another three to their total to make it 8-1. Cole got things started with a single and stole second. A sharply hit ball by Lumbreraz drove him in and when Pilkington tripled to the gap in center, Lumbreraz crossed the dish. An error on the play allowed Pilkington to slide home and make it 8-1.

In the top of the third, Cole fanned M. Clark on four pitches but walked L. Dunn. A ground out from Hendrix pushed Cole near his pitch limit and Pilkington came on in relief. Pilkington continued the trend, however, and got Massingill to ground out.

The 16-4 win sends the Tigers back to the State Tournament in Round Rock. The date, time and opponent have yet to be determined.